More UN BS… How trifling! Kofi Annan rushed to support his second in command on Thursday agreeing with the thrust of his attacks that it is Middle America, FOX News and Rush Limbaugh who are responsible for the problems at the corrupt international organization.

FOX News has reported more than other news outlets on the massive Oil for Food Scandal even producing a damning television special on the massive scandal that upset the UN. Now, it appears that Kofi and the UN are fighting back by attacking the messengers, not the message.
Pathetic! 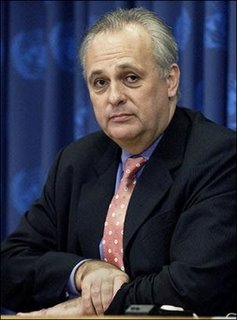 Top US officials have lashed out at what they described as “unprecedented” criticism by UN chief Kofi Annan’s deputy, Mark Malloch Brown, seen here in January 2005, the State Department said.(AFP/Stan Honda)

Kofi came out it support of Mark Malloch on Thursday saying he believes in the “thrust” of his second in command:

UN chief Kofi Annan’s deputy defended his candid critique of American policy toward the United Nations, dismissing suggestions that it was anti-US or partisan.

UN Deputy Secretary General Mark Malloch Brown spoke to reporters a day after calling for more consistent US leadership at the UN in a speech to mostly Democratic foreign policy-makers in New York.

Malloch noted that while Washington is constructively engaged with the UN on a host of issues such as Iran, Afghanistan, Lebanon or Syria, “much of the public discourse that reaches the US heartland has been largely abandoned to its loudest detractors such as Rush Limbaugh and Fox News.”

The remarks prompted a furious reaction from the US Ambassador to the UN, John Bolton, who described them as “a very grave mistake” and urged Annan to repudiate his deputy.

Annan refused to do so and said through his spokesman that he “agrees with the thrust” of his deputy’s speech.

This latest UN fiasco is far from being over. The US is demanding an apology and rightly so.

Roger Simon has thoughts today on Kofi’s successor at the UN (via Instapundit).