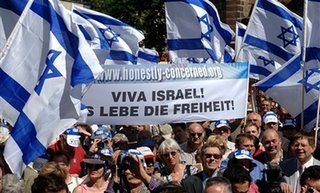 Demonstrators in Nuremberg, southeast Germany, protest against anti-Semitism and recent inflammatory remarks made by Irans’s president Sunday, June 11. 2006. The same day Mexico is playing against Iran in group D during the soccer world cup in the Frankenstadium, Nuremberg, Germany (AP Photo/Daniel Roland)

Exiled Iranians and Jews gathered in Germany to protest the Iranian threats against Isreal outside of the Iranian World Cup match in Nuremberg, Germany:

Some 1,000 people, among them Israel supporters and exiled Iranians, rallied on Sunday in Nuremberg to protest against Iran’s foreign policy as the country’s team faced World Cup opponent Mexico on the pitch.

“A criminal like Ahmadinejad is not welcome in Germany,” the minister told the rally in a central square of the southern host city. “Only his diplomatic passport would prevent his arrest.”

Protesters at the rally, organised by Nuremberg’s Israeli Cultural Society, handed out flyers reading “Red Card for Ahmadinejad”. They said the demonstration was aimed at the Iranian government, not its people or its national team.

“Whoever is fighting against the mullahs is our friend,” said Ali Bazkiyai, an exiled Iranian who left his home country 25 years ago. 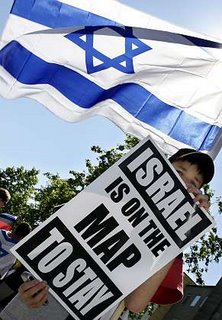 “Israel is on the Map to Stay!” A boy participates in a major demonstration against the policies of Iranian President Mahmoud Ahmadinejad. (Spiegel)

Demonstrators said their anger was targeted at the Iranian leadership and not the country’s football team.

But Iranian football fans have expressed their irritation, saying football and politics should not be mixed.

Publius Pundit has an amazing shot of Iranian exiles outside the stadium in Germany, where women are allowed into the matches unlike in Iran. 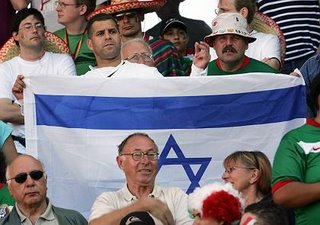 The protests weren’t isolated to the streets. Some funs unfurled maps of Israel during the Iran-Mexico match, which is being broadcast to hundreds of millions around the world. The message? Germany and the western world are unflinching in their support of Israel and its right to exist. (Spiegel) 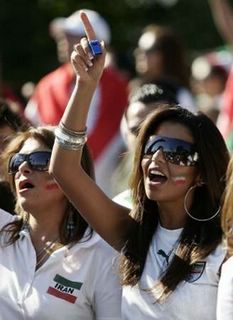 Iran supporters cheer as they watch the World Cup soccer match between Iran and Mexico on a huge video screen in Frankfurt June 11, 2006. (REUTERS/Dominic Ebenbichler)

Stefania has a photo collection of the Iranian fans.
And, Regime Change Iran has a terrific roundup on the protests today.

Meanwhile in Iran… the clerics clamped down on the “hooligans” prior to the Iranian World Cup match with Mexico hoping to prevent new protests throughout the country.