Iraqis celebrate the death of the mass murderer Zarqawi in Iraq.

You probably missed these celebration shots from the mainstream reports today. 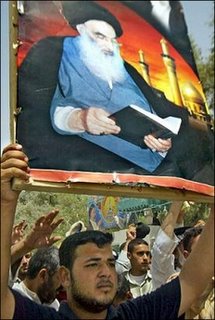 An Iraqi raises the poster of Grand Ayatollah Ali al-Sistani during a demonstration in the holy city of Najaf. The demonstrators expressed their joy for the death of Al-Qaeda leader in Iraq Abu Musab al-Zarqawi.(AFP/Qassem Zein)

The killing of Zarqawi is a “new beginning” for the persecuted peoples of Iraq, the Interior Minister said today: 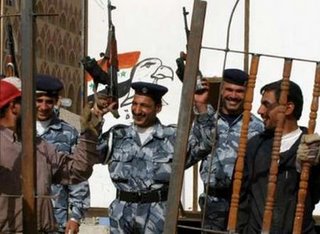 Iraqi soldiers hold up their weapons as they celebrate the death of Al Qaeda’s leader in Iraq, Abu Musab al-Zarqawi in Najaf, 160 km (100 miles) south of Baghdad, June 8, 2006. (REUTERS/Ceerwan Aziz)

Tigerhawk has more on the death of Zarqawi. 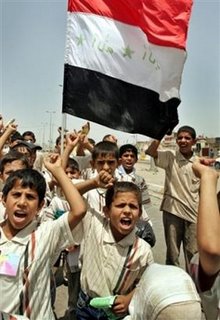 Iraqi children chant “No to Zarqawi” and “No to Terrorism” during a small demonstration in Baghdad’s poor neighborhood of Sadr City. Iraqi and US authorities have vowed to hunt down insurgency leaders after capturing a “treasure trove” of intelligence in the attack that killed Al-Qaeda militant Abu Musab al-Zarqawi.(AFP/Wissam Al-Okaili) 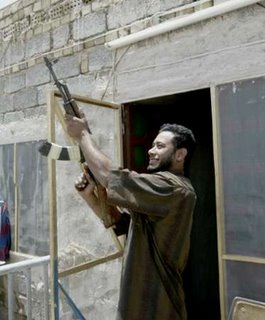 An Iraqi resident prepares to fire his weapon in the air as he rejoices after Iraqi Prime Minister Nuri al-Maliki announced that Al Qaeda leader in Iraq Abu Musab al Zarqawi was killed, in Baghdad’s Sadr city, June 8, 2006. (REUTERS/Kareem Raheem)

Iraqis celebrate as Zarqawi reaches the gates of hell.