After insults against a moderate Iraqi Shiite cleric on Iranian broadcast television, Iraqis stormed the Iranian consulate in Basra and hang an Iraqi flag! 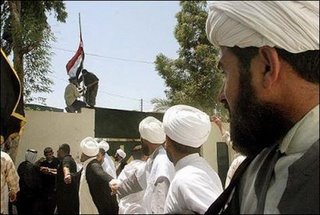 The Gulf Times has the report:

Followers of an Iraqi Shia cleric yesterday attacked the Iranian consulate in Basra and tore down its flag in protest over criticism of their leader broadcast on Iranian television. Some thousand supporters of Sheikh Mahmud al-Hassani al-Sarkhi gathered outside the consulate compound in the southern city before attacking the guard post and smashing its windows.

The demonstrators then entered the compound’s courtyard, tore down the Iranian flag and replaced it with an Iraqi one. They did not enter the consulate building itself.

The incident came after an interview on Iranian television with Islamic scholar Sheikh Ali Korani, during which he criticised al-Sarkhi for claiming to be in regular communication with the hidden imam – a messiah-like figure who will one day return and redeem the Shia community.

Sometines, what goes around… 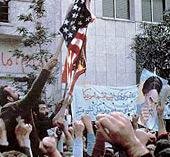 …Comes around. Here is an earlier flag swapping event at the US consulate in Iran. 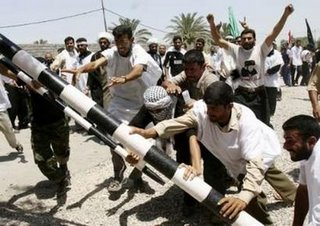 Iraqi demonstrators remove a barricade as they attack Iran’s consulate in Basra, 550 km, (341 miles) south of Baghdad June 14, 2006. A crowd of demonstrators chanted slogans outside the consulate and set fire to a reception area of the building during a protest against an Iranian satellite station, accusing it of insulting a Shi’ite cleric in Iraq. (REUTERS/Atef Hassan) 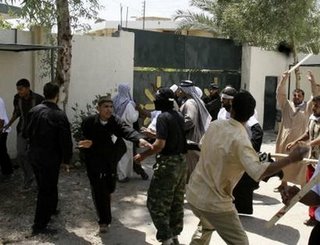 There was also a report of an attack on the Iranian consulate in Karbala as well.