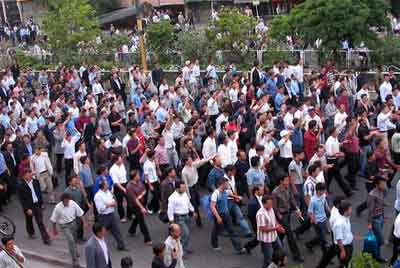 A scene from an earlier Azeri protest this month. 40 protesters have been killed during the crackdown on protesters as reported by Azer News.
News reports from neighboring Azerbaijan claim that ethnic clashes in Iraq are gaining ground:

The wave of mass protests by ethnic Azeris in neighboring Iran shows no sign of abating following the publication of insulting cartoons in its state-owned newspaper, as the death toll in clashes with the police has reportedly climbed to 40.

The number of those detained during the unrest has reached 11,000, according to a union of Azeris worldwide.

“In Ardebil alone, 1,075 have been arrested over 24 hours and over 1,000 injured,” the spokesman for the World Azerbaijanis Congress (WAC), Ali Nijat, said on Friday.

The group said the Iranian authorities are trying to isolate the most active participants of the protests. “They are concealing the locations of detainees from their family members, and demanding $2,500 from the relatives of the dead to hand over their bodies,” said Nijat.

He said that although the protests in Iran are largely seen as a consequence of the row over caricatures, the developments could be considered as an outset of the national liberation movement.

The head of the WAC office in Baku, Pasha Galbinur, said the actions of the Iranian authorities, which consider themselves the followers of Islam, run counter to the founding principles of the Muslim faith. “Order inherent to the slavery system reigns in this godless country. No-one has the right to shed the blood of innocent people.”

Students at Ferdows University in Mashad, provincial capital of Khorasan, staged a protest rally in support of Tehran University students.

Some of their banners and placards read, “long live freedom-seeking students in Tehran,” “stop purging university professors,” “military forces out of university” and “stop press censorship.”

Their protests have been going on despite pressures to force them back to classrooms facing arrests and barbaric suppression.

Dozens of protesters were arrested in Maragheh on charges of participating in protests and several were sent to prison. 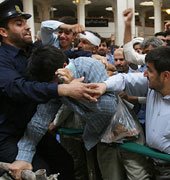 Roos Online has more on the incident in Qom, yesterday:

Every year since the Islamic revolution of 1979 Iran has been celebrating 14 Khordad, a day that is said to have launched the Islamic revolution in 1962 when ayatollah Khomeini protested regime policies and was arrested and subsequently exiled. This year as former president and current chairman of the powerful State Expediency council (which oversees the workings of the three branches of government) gave a public speech in Qom, some attendees shouted “Death to Velayat-e Faghih” slogans, meaning death to the supreme religious leader.

The incident took place right in the beginning of the televised speech and disrupted the meeting, leading to violence among the participants. After one person was carried out of the place by a security guard, a supporter of ultra-conservative cleric ayatollah Mesbah Yazdi got up and openly made charges against Rafsanjani. He was surrounded by others who repeated the slogans that included accusations of Rafsanjani being against Velayat-e Faghih, being counter revolutionary and being an appeaser.

Six individuals were arrested for disrupting the meeting with Rafsanjani in Qom.

NCR-Iran added this about the Qom speech:

The state-run Baztab website wrote, “Some [people] were organized before hand at six locations. Each person was being protected by another person.” “Some youths rushed into the scene chanting anti-government slogans,” it added.

Azeris are planning a protest today at the UN offices in New York to bring attention to the recent crackdown on protesters in Iran.

Iranian men and women are planning a major protest on womens rights on June 12th in Tehran.

Winston at The Spirit of Man is reporting that the son of the late Shah of Iran and the grandson of the late Ayatollah Khomeini held talks recently discussing Iranian issues.

A leading cleric today in Iran warned about the continuing ethnic unrest in the country that the regime is blaming on outside influences (US and Great Britain).