On Friday June 9, 2006, four Jordanian radical islamist Parliamentarians went to Zarqawi’s hometown to praise “Zarqawi the Martyr” after hearing news of his death. 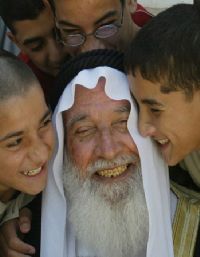 One of the Parliamentarians, Abu Fares, (pictured to the left with his grandchildren) went as far as to say, “I can’t describe them (the innocents that were killed in Zarqawi’s attacks including the Jordanian hotel blasts) as martyrs; these were mobs and ignorant [people].”

Human Rights Watch was virtually silent about the the Zarqawi hotel attacks in Jordan that killed over 57 innocents back in November.

On Monday, June 12, 2006, these four Parliamentarians were brought in for questioning and hundreds of Jordanians took to the streets protesting against Zarqawi and his sympathizers.

Now, on June 18, 2006, Human Rights Watch comes to the rescue of the “Zarqawi the Martyr” sympathizers.

The four radical clerics that were arrested after praising the Martyr Zarqawi last week after his death in Jordan are now being rescued by Human RIghts Watch:

“Expressing condolences to the family of a dead man, however murderous he might be, is not a crime,” Sarah Leah Whitson, director of Human Rights Watch’s Middle East and North Africa division, said in a statement Saturday.

The lawmakers, members of Jordan’s largest opposition group, visited al-Zarqawi’s family home in Zarqa, 17 miles northeast of Amman, on June 9, two days after al-Qaida in Iraq leader was killed in a U.S. airstrike north of Baghdad.

One of the legislators, Mohammed Abu Fares, described al-Zarqawi as a “martyr.”

Human Rights Watch is outraged at the 15 days of detentions but said little about the Zarqawi blasts at that killed 57 innocents at a wedding party in November! Unreal! 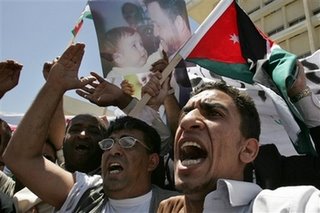 Angry Jordanians shout during a protest Monday June 12, 2006 denouncing four lawmakers who attended the wake of the terrorist behind last year’s hotel bombings in Jordan. (AP)

It’s too bad Human Rights Watch did not feel the same way about the Jordanian hotel bombings… enough to come out with a strong public statement, anyway.