In the last week, Iraqi newspapers carried headlines showing Aljazeerah, the Palestinians & Hammas mourning the death of Zarqawi the martyr…

Iraqis are not at all amused! 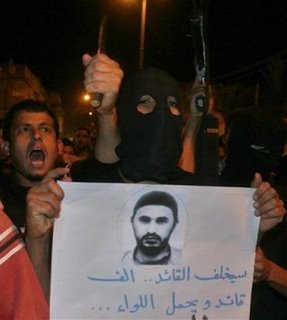 Iraqi-American Haider Ajina writes in with this disgusting news:

Hammas, in their infinite wisdom and blindness, have announced that Al Zarqawi (the Jordanian butcher of the innocent) should be honored by being named “Martyr for the Umah” (Umah means Islamic & Arabic nation). They also expressed their deepest regret and sadness for his killing. They call his killing a Crusader assassination and campaign against Arabs and Muslims. They further announced in a press release that they convey their condolences to the Palestinians, the rest of the Arab & Islamic nation for the death of courageous hero Al Zarqawi who was martyred by the hands of the tempestuous crusaders.

Hundreds of Palestinians demonstrated outside of the City if Khan Yunis (Palestinian authority Area) holding up picture of Zarqawi and condemning what they call his assassination. The Palestinians first knew Al Zarqawi in May of 2004 when he (to every one’s deepest horror) slit the throat of an American hostage. They also chanted in support of Zarqawi’s struggle and sacrifices calling him a true Jihadist who sacrificed himself in the fight for justice in the face the American occupiers. In an interview with one of the demonstrators (who refused to give his name to the newspaper Alyaf) the demonstrator said the assassination of Zarqawi was the result of an Arab-American conspiracy. The demonstrators also called for Bin-Ladin to retaliate quickly and inflict maximum pain in revenge for Zarqawi’s assassination.

Aljazeerah mourns the death of Zarqawi

The Arabic news agency Al-Jazeerah reported the killing of Zarqawi as an assassination; an increase in blood shed and destruction of properties and put a somber note on the news. They also interviewed one of Saddam’s henchmen (hiding in Qatar) who called for revenge and continuing the armed struggle in Iraq (against the current Iraqi government and the USA).

However, as soon as the Iraqis are rid of Zarqawi (thanks to the USA and Iraqi efforts) they condemn the killing of this criminal. To add insult to injury they want to elevate this despicable menace to the level of a martyr for Islam and the Arabs.

Zarqawi defiles Islam and the Arabs with his actions, teachings and his very existence. I know of very few who have done this much damage to the reputation of Arabs and Islam (Bin-Ladin & his kind are on top of the list). Iraqis are slowly realizing who is their ally and who is merely pretending. It is obvious Hammas and their followers are not amongst the friends of Iraq nor the Iraqis. I guess Iraq was a friend of the Palestinians as long as Saddam paid $25,000 per homicide bomber. Now that this financial support is cut off, homicide bomber are killing themselves and others in Iraq.

A British newspaper has reported that a certain camp in the Palestinian territories has exported over two-dozen homicide bombers to Iraq to kill Iraqis and Americans. Nice thank you from the Palestinians. While I am sure that not all Palestinians support Zarqawi, it is very sad to see this Palestinian behavior towards their fellow Arab Iraqi brethren.

It becomes clearer to me every day that the enemies of Islam and the Arabs are in most cases their leaders. Not democracy, not the west, not Christianity or Judaism, but our own Arab and or Muslim leaders who distort our religion and negatively inflame our Arab nationalist feelings for their own power, influence, agenda and wealth.

As for Al-Jazeerah, it is not at all surprising, as I expected them to put a negative spin on the killing of Zarqawi. The Iraqi government closed the office of Aljazeerah over a year ago for inciting violence and disorder in Iraq.