A video on YouTube, “Hadji Girl”, has the BBC and Reuters in an uproar along with the CAIR Organization.

The video is reportedly of a US Marine singing in front of fellow marines about a “Hadji Girl” and how he laughs as she is shot between the eyes.

If this is a US Marine singing the song, it comes at a very bad time. If this is not a US marine singing, then it is another smeer attack against the military.

Although it was said to have been taken down off of the internet, I found it posted at this YouTube address. Here is the video of “Hadji Girl”. 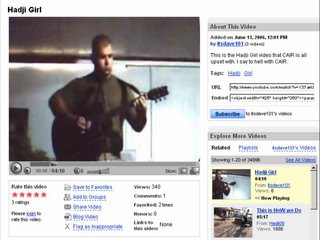 At this time the Marines Spokesman says that the video cannot yet be verified as sung by a marine in front of marines:

Dressed in a green T-shirt and military style trousers and boots, a man sings: “I grabbed her little sister and put her in front of me.

“As the bullets began to fly, the blood sprayed from between her eyes, and then I laughed maniacally.”

Marines spokesman Lt Col Scott Fazekas said: “The video that was posted anonymously is clearly inappropriate and contrary to the high standards expected of all marines.”

Reuters has more and reports that the video is posted at CAIR’s website:

On the video, titled “hadji girl,” a man dressed in an olive-colored T-shirt and long pants sings into a microphone in what seems to be a large room with numerous unseen spectators, with the obscenity-laced lyrics describing encountering an Iraqi woman and her family.

At one point, the man sings, “I grabbed her little sister and put her in front of me. As the bullets began to fly, the blood sprayed from between her eyes, and then I laughed maniacally.” In the background, laughing, clapping and cheers can be heard.

CAIR spokesman Ibrahim Hooper said the military needs to determine who the Marine was, when the event took place and what disciplinary action will be taken.

“It shows what we hope is not a pervasive culture in the Marine Corps of a complete lack of sensitivity to the suffering of civilians in Iraq,” Hooper said.

CAIR has posted the video on its Web site, www.cair-net.org.

So, is this thing real or not? And, how bad is it?

Charles Johnson at Little Green Footballs is already breaking down the story and the media gaffes.

Hot Air has a clean version of the video posted.

Update: (5:30 AM) Texas Rainmaker writes in with the lyrics to “Hadji Girl”:

I was out in the center of Iraq,
and we were under attack,
and well, I didn’t know where to go.

Then the first thing that I could see,
Was everybody’s favorite Burger King,
So I threw open the door and I hit the floor.

Then suddenly to my surprise,
I looked up and I saw her eyes,
and I knew it was love at first site.

Because I don’t speak Arabic, so…

She took me down an older trail,
And she pulled up to a (unintelligible).

And she threw open the door and I hit the floor,
Because her brother and her father shouted,
“Durka Durka Mohammed Jihad”
“Sherpa, Sherpa Bakala”

They pulled out their A game so I could see,
And they said, “Durka Durka Mohammed Jihad”
Sherpa, Sherpa Bakala”

So I grabbed her little sister and put her in front of me
and as the bullets began to fly, the blood sprayed from between her eyes,
and then I laughed maniacally.

And then I hid behind the TV,
And I locked and loaded my M-16
and I blew those little f*ckers to eternity,
and I said, “Durka Durka Mohammed Jihad
Sherpa, Sherpa Bakala
Shoulda known they were f*cking with the Marines”.