Let’s see… the media needed to find someone to play along with their Haditha madness so who better than the… discredited, delusional, blaming, angry, and paranoid Colonel Janis Karpinski of Abu Ghraib fame who has mysteriously moved from villainess to hero in the eyes of the mainstream media.

Well, maybe not so mysterious since Karpinski is now a crowd favorite for the Far Left enthusiasts. 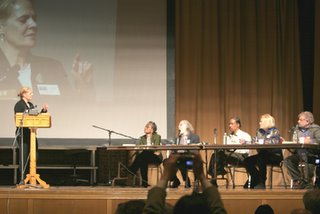 Colonel Karpinski is a definite crowd pleaser with the anti-war crowd for her strange attacks on the military and Bush Administration.

In a January interview at a BushCommission.Org event where she is listed as a “witness to war crimes” (and still listed as a Brig. General even though she was demoted to Colonel posted at World Can’t Wait), Janis Karpinski made a shocking claim of female soldier sexual abuse and death.

Here is the strange accusation by Janis Karpinski that shocked the giddy crowd of deranged Bush haters at the Bush Commission event:

She said women serving in the military in Iraq have been raped while using external latrines in the middle of the night where male soldiers lurk in wait for them, and that several women have died in their sleep from dehydration owing to their decision to drink no water after late afternoon in a country where temperatures average 120 degrees, in order to avoid having to get up in the middle of the night to use the latrines. None of these have been reported by the press, she notes.

Karpinski is still sticking with this absurd accusation as of two weeks ago when Armed Liberal had lunch with her in LA for a Hollywood gathering of moonbats.

But as usual, the truth (that the AP did not have time to research) is so entirely different…

There have been 58 brave women heroes who have lost their lives in the War in Iraq.

Most of the brave women have died in hostile fire, IED and murdering suicide attacks, or vehicle accidents.

7 women died in Iraq from other causes…

There was 1 death resulting from a fall, 1 heart attack, 1 illness, and 4 from unspecified causes. 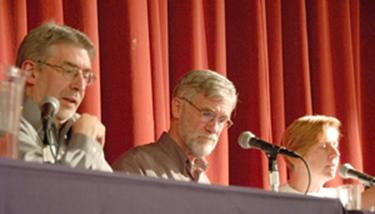 Here are two cohorts in delusion and self importance, Ray McGovern and Cindy Sheehan, who are also part of the Bush Crimes Commission tour.

Of course the AP had no time to research this nuttiness from Janis Karpinski before they interviewed her on her thoughts on the Haditha incident.

Here is the AP interview of the ousted military commander of Abu Ghraib prison and leftist circuit tour speaker about her feelings on Haditha,
VIDEO HERE

The former commander of the military police brigade responsible for Abu Ghraib (grayb) prison says she’s hopeful the truth will come out about what happened in Haditha, Iraq.

Colonel Janis Karpinski says senior military officials are too afraid to tell the truth about what happened.

In an interview with The Associated Press, she says she isn’t confident that the Pentagon will conduct a complete investigation.

Karpinski also adds that core value training for troops in Iraq is coming too late. She says the extra training may not provide any insight into why some troops misbehave.

Karpinski was the highest-ranking officer punished in the Abu Ghraib prisoner abuse scandal. She was demoted a year ago from brigadier general to colonel.

Isn’t she just perfect for the mainstream news?!! Expect to see more of Colonel Karpinski in the days and weeks ahead.

** Michelle Malkin has debunked gruesome smears of our marines today by the UK Times.