The ethnic Ahwazis put together a video showing glimpses of the regime’s horrible oppression, HERE
Here is a powerful line from the video, “We Resist Without Hate.”

The former president of Iran, Hashemi Rafsanjani, had to cut and run from his visit yesterday in Qom after protesters disrupted his speech and started chanting against the Iranian regime:

Speech by Hashemi Rafsanjani, head of the regime’s Council for the State Exigency and second powerful man in the clerical regime was disrupted by protests in the holy city of Qom yesterday. In face of the chaos created he had to break up his speech and leave the town immediately. He was planned to address another meeting in the town but it had to be cancelled.

Aftab, the state-run internet site, reported that “protests were organized and the protesters were located in six different places and each one was protected by three.” The news website added that a number of young people and local residents went to the meeting place as soon as the news broke out in the town and started chanting anti-regime slogans. 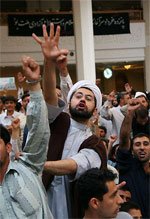 In the city of Bookan clashes broke out between a crowd of demonstrators and militiamen:

Sporadic clashes resulting in shoot out happened, yesterday, in the northwestern City of Bookan, as an angry crowd attacked Islamist militiamen during a security inspection.

The militiamen were intending to confiscate textile products when they were attacked by the local residents of the Amir-Abad district. Several security agents were injured by pieces of stones and clubs and they had to open their escape way by shooting to the air.

Slogans against the regime and its leadership were shouted by the protesters who damaged the local bank and several public vehicles.

The situation is tense in most northwestern cities following last month’s clashes, following the publication of a cartoon judged, by some analysts, as an insult to the Azari ethnicity. Many residents, like most Iranians, seized the occasion in order to show their rejection of the Islamic regime but the move reduced of intensity as some sources tried to portray it as a long run separatist movement.

The cartoon was in reality a hidden critic made of the Islamist clergy, but the Islamic regime’s intelligence circles pushed the promotion of the theory of ethnical insult, in order to increase the fear of a civil war and split of the province from Iran.

The arrested cartoonist named ‘Neyestani’, who has been used as a scapegoat, is in reality an Iranian-Azari, just as like as, most of the Islamic regime’s leadership, including Khamenei, who are native of the Iranian Azarbaijan province and Turkish speaking.

The Islamic regime’s disinformation game was at the same time an occasion for some discredited separatist groups, such as the so-called “Diplomatic Mission of S. Azarbaijan” which are lacking of any real popular support inside, to try to make a name outside Iran; and an occasion for some opportunist oppositionist, such as “Mandana Zand-Karimi-Ervin” who are located abroad, to make ‘comments’ during controversial meetings or on satellite TV and radio networks. It’s believed that some American think thanks, in a desperate need of a kind of Iran solution, are also fueling this wrong campaign which is undermining more the Bush Administration’s popularity among Iranians.

President Bush had stated, last July, on the “need of respecting the territorial integrity of Iran”. The statement had boosted, at that time, his popularity among Iranians and had lead to massive demos, against the Islamic regime in most Iranian border provinces.

The stove is burned black but the few bean-brain regime-sympathizers keep banging their head against the battered stove.

The world is moving forward! Upgrade your recipes!

Judith Apter Klinghoffer has news on the ethnic Ahwazi unrest in the southwest at History News Network:

In the interview with Aftab, former Ahwazi Iranian Defence minister Ali Shamkhani warns that Iran will face a rise in ethnic tensions in the near future and will become a major challenge to the regime.

Shamkhani does not share President Mahmoud Ahmadinejad’s view that ethnic unrest is being encouraged and organised by the British government. Instead, he says that 27 years after the Iranian Revolution, the regime is failing to address the widening gap between people’s expectations and its ability to fulfill them. 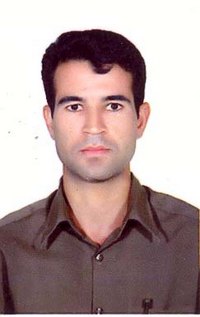 Six of sixteen ethnic Ahwazis in southern Iran currently on trial face execution. The intelligence services have ordered the revolutionary court, which sits in closed sessions, to sentence the following Ahwazi detainees to death: brothers Zamel Bawi, Mohsen Bawi and Emad Bawi, all of whom run computer shops in Ahwaz City, along with teacher Risan Sawary (pictured), Tariq Abayat and Ali Manbohi.

Four of the Bawi brothers are sentenced to death for charges widely believed to be false and the evidence fabricated. 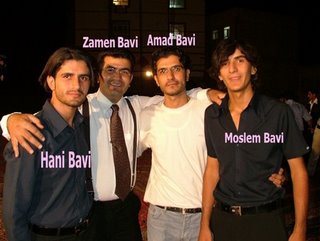 The Bawi (Bavi) Brothers are looking at death sentences in Iran for supposedly organizing protests. (Ahwaz.org)

The Spirit of Man has been following the Iranian protest action closely.
Pajamas Media continues to follow this news.