This is interesting news… When did Canada enter the War in Iraq? Isn’t that the reason the terrorists hate us?
Hmm. 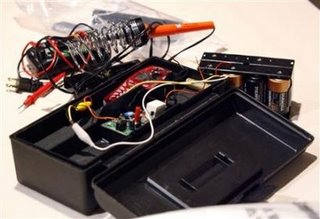 Canadian police display a home-made bomb detonator and equipment seized as evidence during the arrest of a group of people on anti-terrorism charges, at a news conference in Toronto, June 3, 2006. (J.P. Moczulski/Reuters)

Canadian authorities said Saturday they had foiled plans for terrorist attacks in southern Ontario with the arrests of 17 people who were “inspired by al-Qaida.”

The Royal Canadian Mounted Police said they had arrested 12 male adults and five youths on terrorism-related charges, including plotting attacks with explosives on Canadian targets. The suspects were either citizens or residents of Canada and had trained together, they said.

That is three times the amount used to blow up the Murrah Federal Building in Oklahoma City, he said, referring to the April 19, 1995, attack that killed 168 people and injured more than 800.

Midwest Conservative Journal has more on the story.
The Agonist reports that the Canadians attended a training camp north of Toronto.
The Jawa Report has a list of those arrested.
Kate at Canadian Blogger Small Dead Animals is following the story closely.
The Western Standard explains “Canada is not immune to the threat of terror.”
Roger Simon notes the interesting NYT coverage of the arrests.

Here’s an interesting observation by Seixon (via Instapundit):

The Toronto Star also reports that the arrests resulted by use of internet surveillance by Canada’s intelligence service, CSIS, which was also one of the targets of those arrested. This comes a day after prominent liberal blogs were beside themselves that the US government wants to enact similar legislation as exists in the EU, forcing Internet Service Providers to keep records about their members’ usage for up to two years.

Michelle Malkin has news of the bust and later the media’s euphemism of the day.
Michael J. W. Sticklings who was in the area of the arrests has several updates on this news Here, Here, Here, and Here.