Bush Continues Rally in DC- "We Will Succeed in Iraq."

As much as the media would like to, it’s harder for them to hide a dead Zarqawi than it is to hide a robust economy that is beating expectations.

Playing on this hard to disguise good news, President Bush gave another rousing speech this morning in Washington.

After his surprise trip to Iraq on Tuesday, President Bush continued his rally today committing to success in Iraq as a huge military crackdown begins in Baghdad. 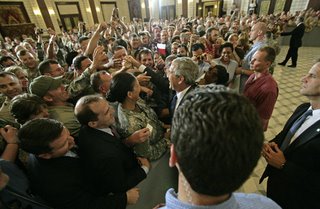 President greets U.S. troops and U.S. embassy personnel during his trip to Baghdad, Iraq, Tuesday, June 13, 2006. “This is a moment — this is a time where the world can turn one way or the other, where the world can be a better place or a more dangerous place,” said the President. “And the United States of America and citizens such as yourself are dedicated to making sure that the world we leave behind is a better place for all.” (White House photo by Eric Draper)

After his trip to Baghdad yesterday, Bush committed to help Iraq succeed in becoming a stable democracy in his talk from Washington today:

“My trip over there gave me confidence that we have a partner that is capable of setting priority and developing a plan to make those priorities, and then following through to see that those priorities are met,” Bush told reporters in a Rose Garden press conference.

“I made it very clear to the Iraqis — and I’m going to make it clear to them again right here — that we’ll stay with them and help them succeed,” he said.

Despite all the good news out of Iraq lately, the president said the threat from Al Qaeda is real, and it must be stopped not just in Iraq but everywhere.

“They still want to do innocent people harm, whether it be in the Middle East or here in the United States of America,” Bush added. “But the terrorists are vulnerable. And we will strike their network and disrupt their operations and continue to bring their leaders to justice.”

Today’s massive crackdown in Baghdad is being carried out by 26,000 Iraqi soldiers, 23,000 Iraqi police and 7,200 coalition forces.

Austin Bay has more on Bush’s trip to Iraq at the Strategy Page.

Mohammed at Iraq the Model talks in depth about the hope on the streets of Baghdad today.

And… Sugiero notes that Iraq still wants the Allied forces to stay!