Not since the last vote has the world witnessed Iraqis dancing in the streets… But sadly, the Democratic Party led by Representative John Murtha stunk up the party. 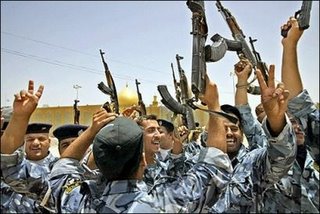 Freedom for Egyptians has more celebration pictures from Iraq.

But, it didn’t take long for democrats to trash this great military success:

“This is just to cover Bush’s [rear] so he doesn’t have to answer” for Iraqi civilians being killed by the U.S. military and his own sagging poll numbers.

Rep. Dennis J. Kucinich, Ohio Democrat, said Zarqawi was a small part of “a growing anti-American insurgency” and that it’s time to get out.

“We’re there for all the wrong reasons,” Mr. Kucinich said.

Scott Thill at the Huffington Post was equally disappointed:

Ah, the more things change, the more they remain the same. If there are any Americans left who believe that the death of Zarqawi is anything other than an orchestrated photo-op, then it’s time to start scouting out apartments in Vancouver. I hear no one cares about the weed there, or the marrying homosexuals. For now, at least.

And, of course there were the comments by the pacifist, Michael Berg who allowed his young son, Nick, to wander the streets of Iraq before the young Berg’s ghoulish death made international headlines.

The DJ’s on the failing Air America, including Jerry Springer and Randi Rhodes, dished out hateful propaganda against the the US and military today, via Bill O’Reilly’s Talking Point Memo (video).

But the most outlandish comments came from the official spokesman of the democratic party on military affairs, and antiwar hawk John Murtha in his interview this morning on CNN:

CAROL LIN, CNN ANCHOR: Fred, one of the most vocal critics of troops in Iraq is Congressman John Murtha. He — last November, as recently as last November, asked — called for U.S. troops to be withdrawn. He joins me now live with reaction to this death of Abu Musab al-Zarqawi. Congressman, it is a pleasure to have you, an outspoken critic in this war, but a very big day for this administration. Is it fair to say that this attack and the death of Abu Musab al-Zarqawi wouldn’t have happened if U.S. troops were not on the ground?

REP. JOHN MURTHA (D), PENNSYLVANIA: Well, I’m not sure about that. I’m not sure it was a bomb that killed him from the air. So I’m not sure about that. But one thing for sure, this is significant. This is significant, two aspects. One is the fact that Zarqawi is killed, but also the fact that they appointed a defense minister and an interior minister. There’s no question we can’t win this militarily. So it’s a matter of time. The Iraqis are getting better. I think the intelligence came from the Iraqis, as I understand it. Now, this is the early reports. And it came to the security forces and the Iraqis and then passed on to the Americans. So this was a key element. Whether they could have done this themselves in this isolated area, I don’t know.

But one thing for sure, this is significant to get rid of a real thorn in the side of the Americans. And of course, what I’ve been saying over and over again is the economic situation is not improving and the public has lost faith in what’s going on. And when you have less electricity, less oil production and so forth, we’ve got a long ways to go. But this is very significant, and I hope the Bush administration will take this as a signal to start working diplomatically with these other countries in trying to reduce our presence as quickly as we can from this $8 billion cost per month.

LIN: But, congressman, I’m hearing two things from you. Yes, a major victory certainly due credit goes to the U.S. forces and the Iraqi forces on the ground. I want to play back to you what Tony Snow, White House spokesperson, said earlier today.

TONY SNOW, WHITE HOUSE PRESS SECY.: Why are you so hellbent on saying we’re going to get out tomorrow? You know, make a good news headline. But the facts on the ground, we’ve got six additional dead guys out of the terror network. But there is still a significant problem here.

LIN: That was the answer to reporters saying, all right, let’s — is the president going to be talking about troop withdrawal? Is that the next conversation to have with military commanders on the ground? Tony Snow also went on to say to critics who say — people who are calling for a pullout, that he has to ask, what is the best way to win? Today was a winning strike, congressman. Is there value to having U.S. forces still in Iraq?

MURTHA: Well, it’s costing us $9 billion a month. It’s cost us so far up to $450 billion by the end of this year, and the 2,400 lives that we’ve lost. What I’m saying is, we’ve got the Iraqis trained, you’ve got a government in place; now It’s time to said a schedule for the withdrawal and the redeployment of American forces.

Just to put things in perspective, here are war cost figures from the American War Library:

John Hawkins has more democratic reaction from the Huffington Post.
Betsy has the video of Zarqawi’s final seconds.
Allah Pundit put it to music.
Uncle Jimbo at Blackfive reveals the real John Murtha.
John Stephenson has more on today’s “stunt”.
Athena has Jordanian reaction to
Zarqawi’s death.
Democracy Project is placing bets on the MSM.

Iraqi American Haider Ajina celebrated today and reported this on the progress in Iraq:

I spoke to my father 2 days ago. He said that his trip from Nejaf to Baghdad and back was the safest one he had in the two years he had been there. There were highway guards every few miles; their presence made everyone feel safe and almost stopped all criminal and terror activity on the highway. He also said that my Grandmother’s neighborhood felt very safe with people coming out onto the street at night. This was all due to increased patrols and more security presence. This is because we keep training and graduating more and more Iraqis to protect their people.