As Democrats continue to pound the military and Bush administration for the War in Iraq, and the media continues to work closely within the Al Qaeda propaganda guidelines, two soldiers go missing…

** Al Qaeda announced today that it is holding the two missing US soldiers.**

And, wounded soldier’s are out looking for their lost brothers! 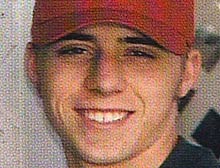 Pfc. Thomas Lowell Tucker, 25, of Madras, Oregon, is missing in Iraq, according to the U.S. Army. (CNN)

Al Qaeda says it will provide more information within the coming days:

The statement said, “the strongest army in the world is turned around, ashamed of their failure [to find the soldiers] and we will give you more information on the incident in the following days.”

On Sunday night, the Army identified two soldiers who went missing after an attack on an area checkpoint Friday as Pfc. Thomas Lowell Tucker, 25, of Madras, Oregon, and Pfc. Kristian Menchaca, 23, of Houston, Texas.

A third soldier, Spc. David J. Babineau, 25, of Springfield, Massachusetts, was killed in the attack.

U.S. Secretary of State Condoleezza Rice, speaking to reporters in Washington, said the missing soldiers are “obviously a matter of great concern to all of us.

Map locates Youssifiyah, Iraq, where a U.S. soldier has been killed and two are missing. (AP Graphic)

The website did not name the soldiers in their statement:

“Your brothers in the military wing of the Mujahedeen Shura Council kidnapped the two American soldiers near Youssifiya,” the group said in a statement posted on an Islamic Web site.

The Web site did not name the soldiers. 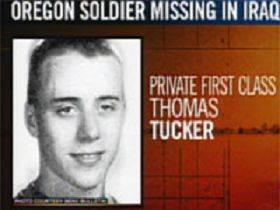 Pfc. Thomas Lowell Tucker (KTVZ and Raw Story)
The Mujahedeen Shura Council mocked the US in their online statement and also is holding four Russians in sympathy to Chechnya. The Islamic terrorist site KavKaz Center has this news:

It also scoffed at “the army of the most powerful country in the world” for returning empty-handed and “shamed” after launching a search operation for the missing soldiers.

But the group did not explain the circumstances of the purported abduction, saying details would be released “in the coming days.”

The US military said Monday that seven US servicemen were wounded in a search operation involving more than 8,000 troops hunting for the two soldiers since Friday night.

It said the council’s Islamic court had decided to give the Russian government 48 hours to “withdraw immediately from Chechnya” and “release all our brothers and sisters detained in Russian prisons” or “take the consequences”.

The Menchaca family is not releasing any pictures or much information about Kristian at this time due to a sick grandmother who is not aware of the situation. 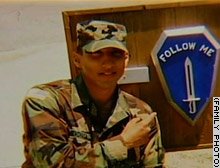 Pfc. Kristian Menchaca, 23, of Houston, Texas, published this evening in a CNN update.

Michelle Malkin has a roundup on the missing soldiers.
Riehl World View has information on the area where they were last seen.
Blogs of War has more on the soldiers.

Updates:
Al Qaeda Says It Is Holding Missing Soldiers
Pray For Pfc. Thomas Lowell Tucker & Pfc. Kristian Menchaca
No Gettysburg Address Required, But Say Something!
“Our Son Died for the Freedom of Everybody in the United States”