US and Israeli officials believe they know where Zarqawi filmed his gun-toting video from last week. 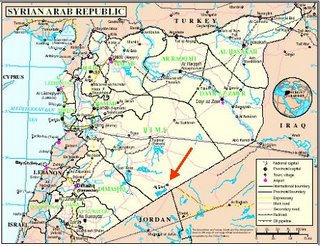 The original Red Crescent camp set up near Tanaf (Tanf) had the capacity to accommodate 10,000 refugees, but no one showed up after the war started.

US and Israeli officials believe that the latest online film released by Abu Musab al Zarqawi was filmed in Syria:

US and Israeli intelligence experts traced the location where the rare tape was filmed to a former Red Crescent army base on Jabal Tanaf, 5 kilometers from the border of Iraq’s Anbar Province. They believe that after the US 2003 invasion of Iraq, the Syrian military handed the base over to Zarqawi’s men as a hideout and haven. Of late, he has established a rear headquarters at the rugged mountain site.

DEBKAfile’s Middle East sources note that proof that the al Qaeda in Iraq’s chief is currently operating out of Syria… The Syrian-Iraqi border is patently still in free use for the smuggling of manpower, arms, explosives and funds.

The Syrian border welcome sign at the Al Tanf crossing in southern Iraq. 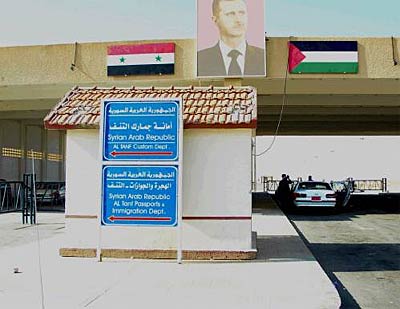 In a setting largely of sand and rocks, authorities at Al Tanf (seen from Iraqi side) check vehicles crossing between Syria and Iraq.
(Sun photo by Robert Ruby)

The Iraqi border with Syria has been a problem for quite a while now:

By December 2003, more than 350 people trying to cross illegally from Syria into Iraq had been arrested, officials say, but they offer no details about the identity of those detained.

Strategy Page says that things are getting lonely for Al Zarqawi in Iraq:

In the last few months, American commandoes nearly caught Zarqawi at least three times. On April 16th and 25th, raids killed and captured over twenty al Qaeda members. Interrogations of the captured men indicated that Zarqawi was in the area. Also captured, before it showed up on an al Qaeda web site, was a video of Zarqawi, holding an American M249 light machinegun. Several of these have been lost, usually from vehicles hit by roadside bombs, and abandoned by their crews.

In the video, Zarqawi pleaded for Iraqi Sunni Arabs to support him and not, as more and more Sunni Arabs are doing, the democratically elected government. Zarqawi believes, as does al Qaeda, that democracy is un-Islamic. Only God, through self-selected clerics, can run a country.

It didn’t help Zarqawi that US troops killed more than 100 of his insurgent friends last week in Ramadi.

Update: Ryan at Cigars in the Sand has a few pictures from the area in question and sends this information:

1. The Iraqis don’t call the the southernmost crossing point into Syria “al Tanf”, they call it al Waleed or Walid. Tanf is just the closest Syrian city to the crossing.

2. There is actually a rather large no man’s land between the 2 border crossings (its at least a couple of miles wide. Traffic from Syria into Iraq sometimes backs up very very far on the road from Damascus. It’s been a huge cause for concern, on both economic and humanitarian grounds.

3. I highly doubt Zarqawi is in Syria, despite the DEBKA report. But even if he was in Syria, he wouldn’t likely be near al Waleed. The al Waleed border crossing is the most secure of any of the 3 Syrian border crossings. I know because I helped train and deploy the Iraqis there. There are also Marine platoons at both Waleed and Trebil that are very active. If he were in Syria, I’d expect him to be north, closer to the border crossing at Husaybah. There is a much much smaller US and Iraqi presence in that area.

I appreciate the information.