Is Zarqawi a good-old-boy?

A new video of Zarqawi bloopers was captured in a raid south of Baghdad this week. 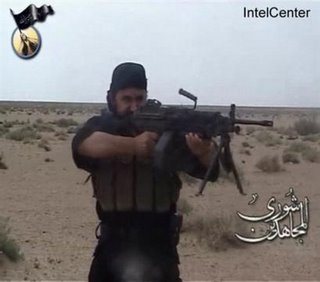 This is an image made from video originally posted Tuesday, April 25, 2006 on the Internet showing al-Qaida in Iraq leader Abu Musab al-Zarqawi. In the rare video, al-Zarqawi accused the West and the United States of waging a ‘crusader’ war against Islam but said Muslim holy warriors were standing firm… in their New Balance Tennis shoes! (AP)

The video, discovered in a series of raids in April on purported Al Qaeda in Iraq safe houses in the Youssifiyah area, 12 miles southwest of Baghdad, gave a view of Abu Musab al-Zarqawi that the Jordanian-born militant chose not to show the world, said Maj. Gen. Rick Lynch, spokesman for the U.S. command.

Al-Zarqawi is “very proud of the fact that he can operate this machine gun, and he proclaims that, and all of his close associates are very proud of what Zarqawi does,” Lynch said in a briefing in which he played a snippet from the video posted by militants on April 25.

“It’s supposed to be automatic fire, he’s shooting single shots. Something is wrong with his machine gun, he looks down, can’t figure out, calls his friend to come unblock the stoppage and get the weapon firing again,” Lynch said.

“This piece you all see as he walks away, he’s wearing his black uniform and his New Balance tennis shoes as he moves to this white pickup. And, his close associates around him … do things like grab the hot barrel of the machine gun and burn themselves,” the military spokesman added.

In the version that appeared on the Internet, al-Zarqawi swore allegiance to Usama bin Laden and said any government formed in Iraq would merely be a “stooge.” He also mocked the U.S. military in Iraq for what he described as suicides, drug use and mutinies, and warned of worse attacks to come.

Lynch, who described the earlier video as “an act of desperation,” declined to specify exactly where or when the unedited material was found…

…Authorities also said 31 “foreign fighters” had been killed since April and 161 Al Qaeda in Iraq leaders were killed or captured since January, seriously undercutting the group’s logistical abilities.

General Lynch says that the US is zooming in on Zarqawi and now suspect that he may be hiding out south of Baghdad.

An earlier report this week that Zarqawi was working out of Syria may not be accurate since this video footage was found a few miles south of Baghdad.

Soldiers Dad has a picture of Zarqawi and his assistant.