Young Marxists and Anti-war activists greeted Laura Bush at a Providence fund raiser for Senator Lincoln Chafee, the Rhode Island senator who voted against tax cuts and her husband, George Bush, in the 2004 election. 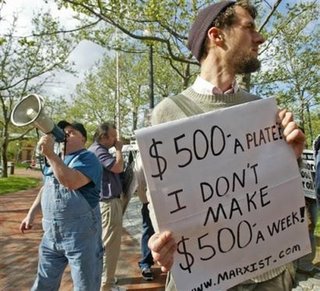 More than a dozen protestors carrying signs chanted outside the Biltmore Hotel as Bush spoke. Chafee voted against going to war, but it made little difference to protest leader Shaun Joseph, 26, a graduate student at the University of Rhode Island.

“Anyone who’s for the war, we’ll protest,” he said, and included Chafee.

About the only thing that made sense is that this is another antiwar protest where the organizer and anti-war activist Shaun Joseph, is a raging Marxist.