Poor little Nihad. She must learn not to step on the Holy man’s carpet while he is praying. 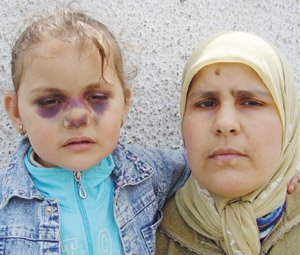 Nihad Afroun learned from the Imam the beauty of discipline in one’s life.

France Echos has the story of little six-year-old Nihad Afroun from Morocco:

What is the crime of Nihad… a 6 years old girl?
She dared to walk on the prayer carpet of Moustafa LAZRAK, a “f’qih” and imam… while he was praying. How beautiful is Tolerance, Peace and Love of this Most Holy Man.

In Morocco the “f’qih” is an entire institution: it is a sort of imam-teacher in koranical schools, that belongs to public education. In Tétouan a “f’qih”, whose role is to teach Islam, attacked an innocent child of 6 years old. The picture speaks by its own: black eyes, bruises, and multiple fractures to the nose. Not to mention the psychological consequences.

The barbarity happened April 19th, at the Sidi Ahmed El Bekkal School. In the afternoon, the school phoned Fatima, the mother of the little girl, explaining her that her daughter had “fallen”. But when she discovered the state of her daughter, Fatima questioned the persons in charge, who delivered another version of the story.

Moustafa LAZRAK was praying at the beginning of the afternoon, in the classroom, although it was time to begin the class. Entering the room, little Nihad stepped inadvertently on the prayer carpet of the “f’qih”.

The child confirms the facts, and resumes the story. The imam-teacher hits her violently, and she fell on the ground.

France Echos has the rest of the story.

Young Nihad must learn the about the sacredness of the f’qih’s carpet.

The story of this beautiful Holy man from Morocco is reminiscent of another lovely Holy man from Denmark who was let go from his teaching job after beating the snot out of a young boy who accidentally exposed the hair of a girl while playing “tag”. Now the child understands the holy lesson of keeping one’s hands to oneself. This virtuous young Imam later rose to glory for faking cartoons and inciting riots.