The Dow hit a six year high today, its third highest close ever.

This, of course, put the Dow above the 2000 slump of the previous administration. 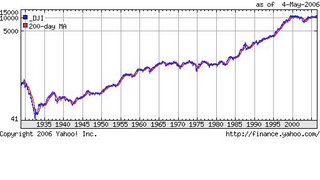 The Dow Jones Industrial Averages is within striking distance of an all-time high:

Wall Street barreled higher Friday, sending the Dow Jones industrials up 138 points to a new six-year high after a report of modest job growth bolstered hopes that the Federal Reserve will end its interest rates hikes. All three major indexes finished the week with gains.

Falling oil prices also helped stocks to their gains, although some believe higher gasoline prices will pressure consumer spending and keep the economy from overheating.

Boy, how is the Left going to explain this one?

And, here is more outstanding economic news from earlier today:

* GDP Growth Is Strong. GDP grew at a strong 4.8 percent annual rate in the first quarter of this year. This follows our economic growth of 3.5 percent in 2005 – the fastest rate of any major industrialized nation.
* Productivity Increased At A Strong Annual Rate Of 3.2 Percent In The First Quarter.
* Hourly Compensation Rose At A 5.7 Percent Rate In The First Quarter – More Than Twice As Much As In The Previous Quarter.
* The Conference Board Index Of Consumer Confidence Increased In April To Its Highest Level In Almost Four Years.
* Industrial Production Posted A Solid Gain In March. Industrial production increased 0.6 percent in March and rose 4.5 percent at an annual rate in the first quarter.
* Consumer Spending Rose 0.6 Percent And Personal Income Rose 0.5 Percent In March.
* Over The Past 12 Months, Employment Increased In 48 States. In March, four states set record low unemployment rates.

Jayson at Polipundit has more on the latest numbers.