Democrats are stuck in a “genocide quagmire.”

How silly of us to fall for the hawkish performances at the National Mall! 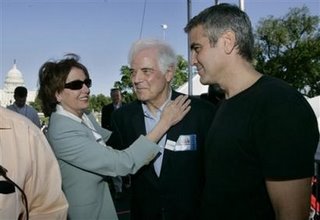 How silly of us! We should have known that the grandstanding on the grandstand on the National Mall with George Clooney and Nancy Pelosi and Al Sharpton was just a fleeting democratic moment of bravado.

In fact we should have voted right then and there while their chests were all puffed out in black disco shirts to move troops to Darfur. There are some 3,500 soldiers of the U.S. Army’s 2nd Brigade stuck in Germany right now anyway while a U.S. force reduction in Iraq is considered. It would have been a perfect time.

This also had many of us to scratching our heads wondering why these doves were all of the sudden demanding that America take action in Janjaweed-land.

Via WILLisms, David Frum pointed out:

An enlightened liberal internationalist wants to send troops to the Sudanese region of Darfur to protect a majority Muslim population against murderous Islamic extremist militias.

On the other hand, he or she must oppose keeping troops in Iraq to protect a majority Muslim population against murderous Islamic extremist militias.

On the other hand, he or she must condemn the use of U.S. airpower to stop Osama bin Laden’s allies in Iraq from committing terrorist atrocities.

It was strange twist of character, you have to admit.
Ken McCracken was confused.

The dems dog and pony show will soon be but a memory.

Matthew Yglesias at The American Prospect puts an end to all of the hawking today in his article questioning … “Is it really genocide?” while using Saddam’s “ambiguous” genocide of the Kurds as an excuse to procrastinate. How very UNish of him!…

The choice of words matters because “genocide” has come to serve as a conversation-stopper, shutting down reflection on the costs and benefits of various policy options in favor of vague-but-insistent injunctions to “do something,” anything, to make it stop. The legal definition is a bit broad, and it’s best to leave it up to the lawyers at the State Department and the United Nations to argue over whether it fits the case at hand. What comes to mind when non-lawyers hear the word “genocide,” however, is something akin to the events of the Holocaust, where a regime pursues the destruction of an ethnic group as an end in and of itself. Without denying that monstrous things are being done in Darfur, I don’t think that genocide — in this sense — is what’s happening…

Consider Saddam Hussein’s Anfal campaign against Iraqi Kurdistan, another good candidate for the title of an ambiguous genocide. The Human Rights Watch report on the subject doesn’t see the ambiguity, but acknowledges the basic reality that Saddam did not, in fact, kill all of Iraq’s Kurds. What’s more, the report states that “outside pressure . . . was not a significant contributing factor to the amnesty” that ended the slaughter. Rather, “it is clear from the Fifth Corps report on the Final Anfal that the decision to declare a general amnesty was made because Baghdad was convinced by September 6 that the peshmerga forces had been crushed.” The inhumanity directed at civilians was, in other words, a military tactic, aimed at a military goal, the crushing of Kurdistan’s armed guerillas who had risen in rebellion against the Iraqi state.

… Faced with purest evil perhaps we really do have a duty not to think things through, but faced with ambiguity surely the obvious questions deserve answers before bombs start dropping.

How silly of us.

Outside the Beltway has more thoughts on genocide.