What started off as a simple protest demanding the death of the organizer of a prostitution ring, sadly ended with water cannons.

The protesters demanded that, “Sexploiters Leave or Face the Wrath of Allah!”
I think we all know what that means! 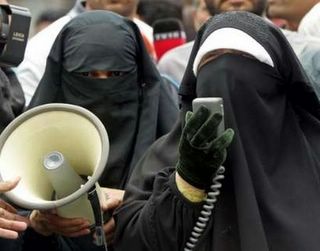 A veiled Kashmiri Muslim woman (R) addresses a protest against a sex scandal in Srinagar May 8, 2006. Police used water canon on Monday to disperse dozens of women and children, mostly veiled in black from head to toe, protesting over a suspected prostitution ring involving local politicians and officials. (REUTERS/Fayaz Kabli)

Police in Indian Kashmir used water canon to disperse dozens of women, many wearing black veils, during a new protest on Monday over a suspected prostitution ring involving politicians.

“Sexploiters leave our land and face wrath of Allah,” (that would be death)… read one banner carried by the protesters in the heart of main city, Srinagar.

The restive Himalayan region has been witnessing protests since last week after newspapers and television channels reported details of a racket, which they allege provided prostitutes for local politicians, police officers and bureaucrats.

The veiled protesters said that India was using prostitution as a war weapon. 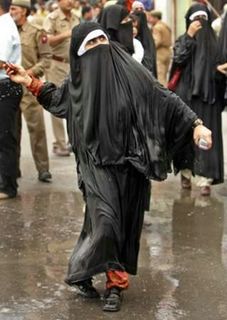 A veiled Kashmiri Muslim woman soaked with water throws a stone at Indian police during a protest against a sex scandal in Srinagar, May 8, 2006. (REUTERS/Fayaz Kabli)

The women believe that India is using sex and booze as a weapon to wage war in the region:

“India is encouraging prostitution in Kashmir and using it as a war weapon,” Andrabi, who has been campaigning against prostitution and alcohol consumption told Reuters.

Jammu and Kashmir is mainly Hindu India’s only Muslim-majority state and nearly 47,000 people have been killed in a separatist revolt by Muslim militants since 1989.

The burka-clad protesters scattered after officials let loose on the water cannons. 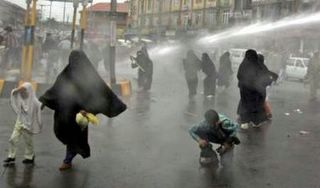 A news photographer ducks as veiled Kashmiri Muslim women are sprayed with water cannons during a protest against a sex scandal in Srinagar, May 8, 2006. (REUTERS/Danish Ismail)