The chair of Vietnam’s women’s union says this is “offensive towards women’s honour and dignity”. 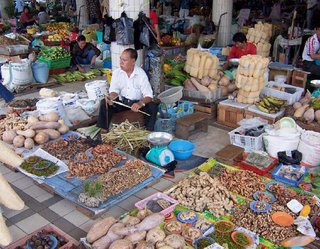 Malaysian markets are known for their fine goods and fresh produce.

Vietnam is protesting the sale of a 21 year old Vietnamese woman in a Malaysian marketplace:

The Vietnamese ambassador in Kuala Lumpur sent a note to Malaysia’s internal affairs ministry “protesting against any act of trading Vietnamese women, and seeking their help to identify the woman”, the Tien Phong newspaper said.

Malaysia’s Chinese-language daily Guang Ming reported that the woman offered herself for sale last week during a morning market in a village in Gombak, on the outskirts of Kuala Lumpur.

She came to the village with a 40-year-old peddler who made the offer on her behalf, it said, adding that the woman apparently volunteered to be sold because she had been in Malaysia for some time and had used up all her money.

It did not say what she had been doing while in Malaysia or how much she was sold for. The auction started at 7am and was concluded four hours later when a 60-year old man bought her, the report said. It was unclear whether the Malaysian man intended to make her his wife, surrogate daughter or maid.

Some of the villagers asked the peddler for his mobile number for future reference in case he had any more women to offer.

Another report revealed that the woman was bought at the basement bargain price of $5,000.