Vicente Fox stirred things up in the Beehive State when he pushed for a guest worker program for the millions of illegal Mexicans in the US… and blasted the US border wall plan. 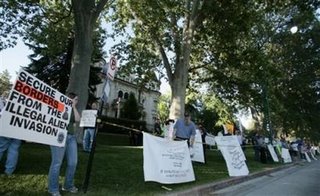 Mexican President Vicente Fox is here in the US to push for a guest worker program but the trip may backfire on him:

Vicente Fox wants the U.S. Congress to approve a guest worker program and a path for citizenship for some of the 6 million(?) undocumented Mexicans in the country.

But his visit could be seen as meddling in U.S. politics and strengthen support for hard-liners who want to tighten immigration laws.

“This trip has all the makings of a boomerang,” said George Grayson, a Mexico expert at the College of William and Mary. “It is going to be virtually impossible to be critical enough to keep his political support back home, while not looking like he is interfering in U.S. affairs.” 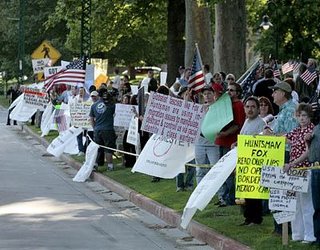 Demonstrators on Tuesday protest against Mexican President Vicente Fox and illegal immigration in front of the Governor’s Mansion while Fox and Utah Gov. Jon Huntsman Jr. dine inside. (AP)

Protesters urged Mexican President Vicente Fox to “take care of his own people” as he met with Utah Governor Jon Huntsman Jr yesterday in Salt Lake City on Tuesday night:

Standing behind yellow police tape near the edge of the sidewalk, the demonstrators, most of them Utah Minutemen, cheered as drivers on South Temple honked their horns and waved, signaling their support. 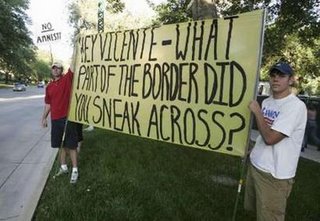 Protesters stand in front of the Utah Governor’s mansion during a state dinner for Mexican President Vicente Fox in Salt Lake City, Utah May 23, 2006. (AP)

Fox bashed the US plan to build a wall between the two countries:

Fox began his visit Tuesday amid a heated debate over illegal immigration. He said Mexico wants to be part of the immigration solution, not the problem.

“It’s not with fences that we are going to solve this problem,” he told representatives of groups active in Utah’s Mexican community.

On Wednesday, Fox was scheduled to address a special session of the Utah Legislature before heading to Washington state. From there, he is expected to move on to California for an address before California lawmakers and meetings with Gov. Arnold Schwarzenegger and Los Angeles Mayor Antonio Villaraigosa.