Vicente Fox
Commenting on US Senate’s Immigration Reform Bill
May 25, 2006

Millions and Millions, and without real border security, Millions more… 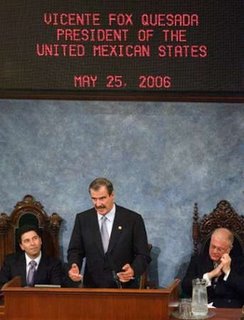 The Senate passed their immigration reform legislation yesterday 62-36. 4 Democrats joined 34 Republicans in voting against the bill.

How did that happen? How do you give-in so much that the biggest vote of the year is the minority party’s plan?

* Dick Durbin was pleased with the bill and urged the House to work with the Senate,… “We should seize this moment so America can move forward.”

* Senate Minority Leader Harry Reid said,… “Today is not the day to celebrate. We have won a big battle but not the war.”

* Senator Kennedy added,… “We would welcome the strong leadership of the president of the United States in this undertaking.”

* Never ashamed to give his opinion, Jimmy Carter, gave a big thumbs up,… “The Republican President’s commitment to immigration reform is “quite admirable.” I agree with Bush’s support of a system that would eventually grant citizenship to some illegals.”

* But, perhaps Mexican President Vicente Fox summed it up best:

“This is a historic day, one to celebrate,” Fox told Mexican broadcasters from his presidential jet, in response to the Senate vote.

Vicente knows an Amnesty plan when he sees one!

Senator Santorum was also honest about the Senate’s amnesty plan:

“They fought for it. They earned what they got yesterday,” Fox told a California Chamber of Commerce audience.

The AP has the actual quote:

“The paesanos — they fought for it, they earned what they got yesterday,” he said.