US State officials met today with the United Nations Committee Against Torture in Geneva to defend America’s treatment of suspects detained in the War on Terror.

In what is looking to be a Leftist’s America-bashing and Bush-bashing wet dream, the US will be asked to disclose security secrets to the UN among other things :

US Assistant Secretary of State for Human Rights Barry Lowenkron told the Committee Against Torture in Geneva that US law prohibited such practices.

Senior US officials are testifying before the committee for the first time since the 11 September 2001 attacks.

Rights groups accuse the US of flouting the UN Convention against Torture.

They say the US allows the torture and inhumane treatment of foreign terror suspects at their detention centres around the word, including Afghanistan, Iraq and Guantanamo Bay, Cuba.

The committee is demanding information from the US on secret detention centers and extraordinary rendition:

The committee has 59 questions for the US, 53 of which relate to the war on terror.

Officials will be asked to provide a list of all secret detention centres, nationalities and numbers of those being held and the reasons for their detention.

The committee will also ask for details of detainees taken abroad to third countries, in a process known as extraordinary rendition.

It wants to know what measures the US has taken in the wake of the Abu Ghraib scandal to ensure that such abuse does not happen again.

They may also want to know if there has been an independent inquiry into the possibility that high-ranking government officials authorised torture.

It’s going to be a long day of eating crow for the US officials sitting at the UN Court. 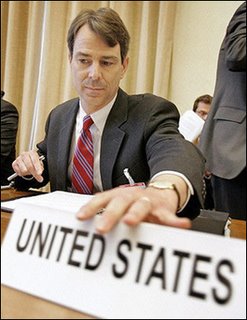 Legal advisor to the US state department, John Bellinger (2L), arranges items prior the opening of a session of the 36th Committee against Torture, at the United Nations (UN) Office in Geneva. The United States vowed never to condone torture as the UN opened its first public examination of the US record on torture since President George W. Bush unleashed a “war on terror.”(AFP/Fabrice Coffrini)

Amnesty International leads the charge against the US in its report that echoes the statements from Leftist groups and released detainees:

The 10-member Committee is tasked with monitoring the compliance of countries with their obligations under the treaty. During its three-week meetings, it will also be looking into reports on Georgia, Guatemala, Qatar, and Togo.

The U.S. government claims that it is against the use of torture under any circumstances, including war and public emergency, but a number of human rights groups assert that the U.S. government has resorted to torture methods at Abu Ghraib, Guantanamo, and its other military-run prisons around the world,

“The U.S. government is not only failing to take steps to eradicate torture, it is actually creating a climate in which torture and other ill-treatment can flourish,” said Curt Goering of Amnesty International’s U.S. chapter.

The group asserts that measures taken by the U.S. government in response to widespread torture and ill-treatment of terror suspects held in U.S. military custody “has been far from adequate.”

“This is despite evidence that much of the ill-treatment stemmed directly from official policy and practice,” says Goering.

Of course, AI’s assessments are frequently used by Islamic Terrorists in their recruiting efforts.