Rioting broke out at a Darfur refugee camp as UN Ambassador Jan Egeland made a visit to check on the camp conditions. One translator was hacked to death during the melee,
VIDEO HERE

The refugees felt that Jan Egeland and the UN was being “stingy” with protection and assistance at the Darfur refugee camp.

UN relief coordinator Jan Egeland chats with refugees in Darfur before they turned on his entourage and hacked a translator to death. 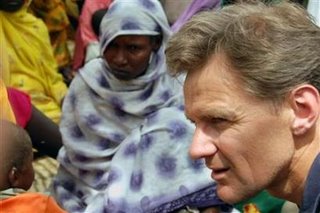 Jan Egeland, the U.N. under-secretary for humanitarian affairs, talks to widows in the Gereida area of Sudan’s South Darfur state, May 8, 2006. (Opheera McDoom/Reuters)

UN envoy Jan Egeland escaped a violent riot at a Darfur refugee camp on Monday. But, one of the translators present was hacked to death by the angry mob of refugees:

As the parties sought to bolster the newly-inked peace plan, the violence that broke out during Egeland’s visit underscored the precarious situation in the western Sudanese region.

“There were clashes and it turned chaotic. A Sudanese translator for the African Union was killed,” a UN official told AFP, adding that several people were also wounded in the clashes.

The violence erupted when angry residents targeted aid workers in Kalma camp, one of the largest camps for internally displaced people with close to 100,000 inhabitants.

A UN vehicle was attacked by stone-throwing and stick-wielding refugees after a rumour spread among the crowd that one of the local aid workers had links to the pro-government Janjaweed militia.

The AU translator was killed when a subsequent stampede erupted.

Later Mr. Egeland said that it is important that the refugees not attack the African Union workers sent there to protect them.