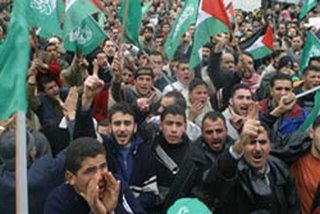 After violent riots erupted over an offensive “cockroach cartoon”, officials in Tehran detained the cartoonist and chief editor of an Iranian newspaper, charged them, and took them to Evin prison. (AP)

This time protesters rioted against the mullacracy after an offensive cartoon was published in Iran:

The ILNA labor news agency said thousands protested in the northwestern city of Tabriz and police used teargas to try to disperse the crowd. The exact number of demonstrators could not be confirmed.

“They are angry because … we (Azeris) are insulted by a cartoon,” Soraya, a 40-year-old mother, told Reuters by telephone from Tabriz.

The cartoon, which appeared in Friday’s edition of the official Iran newspaper, showed a boy repeating the Persian word for cockroach in different ways, while a cockroach in front of the boy asked “What?” in Azeri.

The conservative Siyasat-e Rouz daily on Sunday said a crowd of Azeris had set fire to Iran’s local office in the city of Orumiyeh, where Azeris make up the majority of the population. They account for about 25 percent of the inhabitants.

ILNA said the protesters chanted slogans against the cartoon in Azeri outside the provincial governor’s office, which some of the crowd pelted with stones. 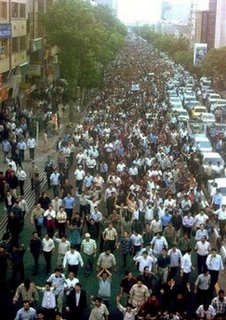 Azeri people attend a rally to protest against an allegedly insulting cartoon, in Tabriz some 600 kms (360 miles) northwest of Tehran, on Monday May 22, 2006, and according to news reports, police used tear gas to disperse the protesters. The government closed one of the country’s top three newspapers Tuesday May 23, detaining its editor and cartoonist, for publishing a caricature that caused members of Iran’s Azeri minority to riot in protest. (AP Photo/Mehr news agency)

Iranian officials shut down the newspaper after the uproar about the offensive cockroach cartoon:

State television reported that the Press Supervisory Body had closed the state-owned Iran, “due to its publication of divisive and provocative materials.”

The closure was indefinite, the television reported. It was the first time a newspaper had been banned since President Mahmoud Ahmadinejad took office last year.