After weeks of threats, violence, death, marches, bombings, and trading gunfire, the media is reporting today that the Palestinian situation is close to a civil war. Imagine!

Reuters catches the latest shootout between the rival gangs on film,
VIDEO HERE 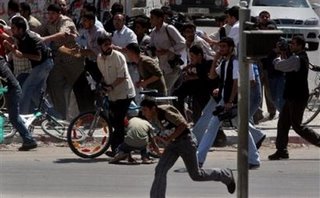 Palestinians run during a shootout between Palestinian police loyal to President Mahmoud Abbas and Hamas gunmen and members of the new security force of the Hamas-led government in Gaza City Monday May 22, 2006. (AP)

(Fatah) Gunmen kill one Hamas member and wounded 4 others in violence today in Gaza:

Gunmen in Gaza shot and killed one Hamas member and wounded four others from the Islamic militant group on Wednesday in renewed violence after Prime Minister Ismail Haniyeh called for rival factions to show restraint.

No group claimed responsibility for the shootings, which came amid a power struggle between Hamas, now in charge of the Palestinian government, and President Mahmoud Abbas’s Fatah faction.

Hamas sources said three unarmed Hamas members were kidnapped at dawn in Khan Younis in the southern Gaza Strip. They were later dumped on a street with gunshot wounds in their legs. Medics said one of the wounded men later died.

Relatives of the three Hamas members blamed Fatah gunmen for the abduction.

That’s strange, they usually put the blame where it rightfully belongs,
…the Jews. 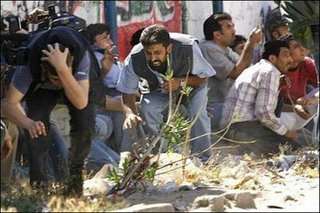 Civilians take cover during clashes between Palestinian police and the new paramilitary force deployed by the Hamas-led government, outside the Parliament building in Gaza City. A Jordanian was killed and at least eight Palestinians wounded, as rising tensions between the rival Hamas and Fatah factions erupted into heavy fighting near the parliament in Gaza.(AFP/Samuel Aranda)

It is interesting that when the Palestinian factions are shooting at eachother in the streets of Gaza City the media hesitates to call it civil war.

But, in Iraq if a roadside bomb goes off killing random groups of Iraqis or if there is any increase in violence, they blame the attacks on increased sectarian violence.