So, is “add-on” the new Democratic catch phrase for raising taxes? 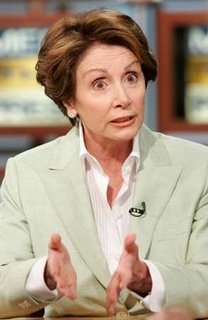 U.S. House Minority Leader Rep. Nancy Pelosi (D-CA) gestures as she speaks during a taping of ‘Meet the Press’ at the NBC studios in Washington, DC May 7, 2006. (REUTERS/Alex Wong)

Nancy Pelosi promised America tax hikes if democrats gain control of the House of Representatives. She also confessed to taking sage advice from the Democratic Hawk in Congress, John Murtha, on security and defense yesterday in an interview with Tim Russert on “Meet the Press”.

Russert called the story striking because when Pelosi, a California Democrat, was interviewed on his program in May 2004, she stated that the United States should “stay to stabilize Iraq.”

Pelosi said her opinion had changed, based on “some very expert advice” from Rep. Jack Murtha, D-Pa., who has 35 years of experience in national security.

“I believe that we need a better plan,” Pelosi told Russert.

“What our Democratic position is, and our real security agenda, is that 2006 must be a year of significant transition in Iraq,” she said.

Again,… the democrats fall back on the mysterious “better plan.”

MR. RUSSERT: Is impeachment off the table?

REP. PELOSI: Well, you never know where the facts take you, but the—for any president. But, but that isn’t what we’re about. What we’re about is going there and, and having high ethical standards, fiscal soundness and a level of civility that brushes away all this fierce partisanship.

REP. PELOSI: John Conyers does what he does on his Web site. John Conyers is an enthusiastic advocate. I am the leader. Our caucus will decide where we go.

On the latest democratic scandals, Russert had Pelosi stumbling:

MR. RUSSERT: “The top Democrat on the ethics committee of the House of Representatives, Alan Mollohan of West Virginia, was reported, first by The Wall Street Journal, to have quietly directed at least $178 million dollars in taxpayer funds to a network of home-district friends, business partners, contributors, former employees. Along the way, he curiously became a multimillionaire in real estate, and federal investigators are looking at whether he failed to properly disclose scores of newly acquired assets.”

You have Congressman Jefferson of Louisiana, someone pleaded guilty and said he had paid him bribes. You have Cynthia McKinney investigated for roughing up a police officer. You have Congressman Kennedy who, in the wee hours, entangling himself with the police department. So the Democrats have ethical…

REP. PELOSI: May I respond to that?

MR. RUSSERT: …the Democrats have ethical challenges, too, correct?

On having tax-payers pay for elections:

MR. RUSSERT: Who’s going to pay for that? You think the American taxpayer will want to pay for campaigns?

REP. PELOSI: Well, you can—it can be an add-on. Or the American people can decide…

On the democratic majority in the House:

MR. RUSSERT: But in, but in 2004, you predicted you would be the speaker… It didn’t happen.

REP. PELOSI: I, I, I’m, I thought John Kerry was going to be president of the United States.

MR. RUSSERT: You guaranteed that.

REP. PELOSI: That I guaranteed.

MR. RUSSERT: Can you guarantee you’ll be the speaker?

REP. PELOSI: No. I can say that I can—I can say what I said then. If the election were held today, we would have a Democratic majority.

Viking Pundit has a few words for “speaker” Pelosi.