The skinheads threw flares at the police and marchers and pummeled the activists at the first gay rights parade in Moscow,
Video HERE 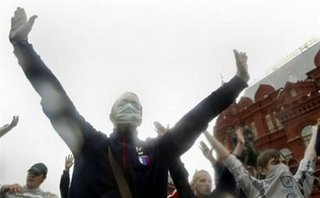 Nationalist protesters shout anti-gay slogans outside the Kremlin in Moscow, Saturday, May 27, 2006. Police and nationalist protesters forcefully prevented Russian and foreign gay and lesbian rights activists from rallying Saturday in Moscow, where they had hoped to put on a display of gay pride despite the city government’s vehement refusal to grant permission for a parade. (AP Photo/Sergey Ponomarev)

The skinheads were waiting for the gay rights activists in Moscow today.

Police did not intervene during the pounding by the skinheads!… German activist, Volker Beck, was beaten and then arrested! 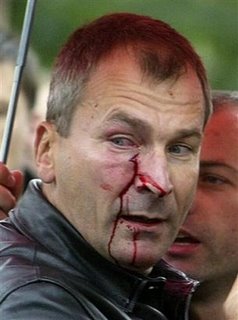 Green member of Germany’s Bundestag, Volker Beck, stands with his face bleeding after being attacked by nationalists in a square opposite Mayor Yuri Luzhkov’s office in Moscow, Saturday, May 27, 2006. As a Green member of Germany’s Bundestag, Volker Beck, was giving an interview before TV cameras, about 20 nationalist youths surrounded him and pummeled him, bloodying his nose. Volker Eichler, a gay activist from Berlin who witnessed the beating, said police did not intervene. (AP Photo/Mikhail Metzel)

One foreign activist described the scene today as the gay rights protesters reached the tomb of the unknown soldier in Moscow:

“The entrance to the park was closed when we got there and there was a crowd of people outside, what most people would call neo-fascists,” Robert Wintemute, a professor at King’s College in London and one of the foreign gay activists who took part in the protest, told AFP.

“There was a scuffle and then I saw police taking Nikolai Alekseyev away and putting him in a police van. After that, neo-fascist thugs started running wild here and there. Thugs kicked Merlin Holland, the grandson of Oscar Wilde. I’ve never seen such things,” Wintemute said.

After the gay rights activists found the gates locked to the unknown soldier, all hell broke loose. 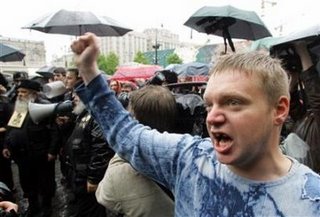 A nationalist, anti-gay demonstrator gestures during a protest near Red Square in Moscow May 27, 2006. Russian police, militant Orthodox Christians and neo-fascists broke up a first ever gay rights march in Moscow on Saturday, but the homosexuals claimed their short-lived protest as a ‘great victory’. (Shamil Zhumatov/Reuters)
Defying a court order, gay rights activists meeting in Moscow went ahead with an unsanctioned parade:

Moscow police moved quickly Saturday to end an unsanctioned gay pride march and prevent a counter demonstration from organizing in the Russian capital. Local news agencies Interfax and RIA said that as many as 50 people were detained by police, including Nikolai Alekseyev, one of the organizers of the pride march.

More than 1,000 police officers were put on full alert Saturday when Alekseyev and other organizers said they would ignore a court ruling upholding Mayor Yuri Luzhkov’s decision not to issue a parade permit.

While police were blocking the march from taking place other officers were rounding up skinheads, members of a far right political group and supporters of the Russian Orthodox Church who were gathering not far away to form a counter protest. As police moved in the counter protesters began chanting ”Sodom Won’t Pass Here!“

…Conservatives and Russian Orthodox and Moslem leaders have led a pressure campaign against the march. Russian Patriarch Alexy II has denounced the planned festival and parade, and the leader of Russia’s Muslims has called for a “violent mass protest” if gay leaders go ahead with pride celebrations. 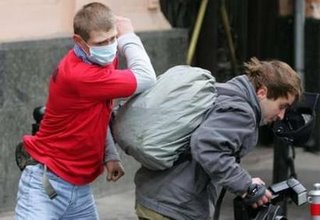 A nationalist anti-gay protester hits a photographer during a protest in Moscow May 27, 2006. Russian police, militant Orthodox Christians and neo-fascists broke up a first ever gay rights march in Moscow on Saturday. (Reuters)