Pro-American President Alvaro Uribe, whose father was killed by guerillas 22 years ago, won big in his re-election attempt as Colombian President. 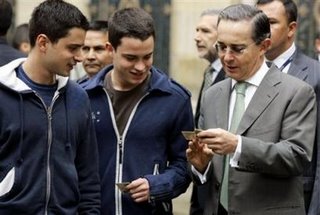 Colombia’s President Alvaro Uribe watches the ID’s of his sons, Jeronimo, left, and Tomas, center as he lines up to vote during presidential elections in Bogota, Sunday, May 28, 2006. Uribe is running for re-election. (AP Photo/Fernando Vergara)

So, why is Uribe so very popular in Colombia?

He’s destroying terrorism, installing free markets, and creating a new nation out of one of the world’s worst hellholes on a scale unseen almost anywhere else in the world. The stock market has gone up 500% since he’s taken office. The debt has been repaid early, the peso is soaring, the jobless rate is tumbling (unemployment is down one-third since he took office!), investment both foreign and domestic has gone through the moon and confidence and optimism is returning. The economy grew at 5% last year. Crime has evaporated. The country reported exactly two kidnaps this year.

Early election results have Uribe winning at 61% with his closest rival at 23%:

With 49 percent of votes counted, Uribe had 61 percent of the ballot while his closest rival, Carlos Gaviria of the socialist Polo Democratico Alternativo, had 23 percent, according to the Web site of the National Registry, which oversees the elections.

“This election win is so important for Colombia, it means a continuation of his security and economic policies that have been so successful,” said Bogota-based political analyst Alfredo Rangel. “It’s vital for Colombia that these policies are converted into a strong second term.” 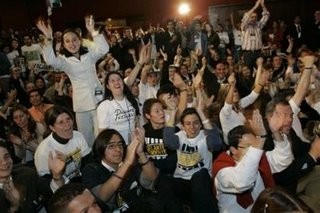 Supporters of president Alvaro Uribe celebrate in Bogota, Colombia, Sunday, May 28, 2006. Uribe was re-elected in a landslide Sunday in Colombia’s most peaceful elections in more than a decade, strengthening the U.S. ally’s mandate to crack down on armed groups and drug traffickers. (AP Photo/Leslie Mazoch)

With the economy roaring and security better than is has been in decades, Uribe if very popular in Colombia:

His boosting of the armed forces has helped slash Colombia’s notorious kidnapping and homicide rates to a two-decade low. This has been gratefully noted in a country where it seems every family has been touched by violence.

“People now know they can travel around the country in safety, something that was impossible four years ago,” said Carlos Trujillo, a sales manager who intends to vote for Uribe.

Security analysts who initially predicted a massive offensive by leftist rebels as a means of defying Uribe’s security policies have called this the most peaceful election campaign in a decade.

Colombians also have fatter wallets, as the economy grew more than 5 percent last year. Multinational companies such as Philip Morris International and Exxon Mobil Corp., which once shunned this war-ravaged economy, are sniffing for investment opportunities.

Unemployment has fallen by a third since Uribe took office, and inflation in this $135 billion economy was at its lowest rate last year in a half-century. 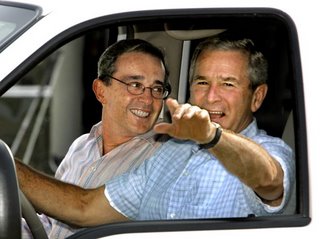 U.S. President George W. Bush welcomed Colombia’s President Alvaro Uribe, left, with a drive in his pickup truck at his ranch in Crawford, Texas in August 2005. (US Dept. of State)

Wow! A. M. Mora y Leon at Publius Pundit has a huge roundup on the Colombian election today, and more here.
Boz has more election results.