The populace was a bit uncomfortable with the prostitution ring they discovered in their community.

14 were injured in rioting that shut down the city of Srinagar over the phone cam sex scandal in Kashmir. 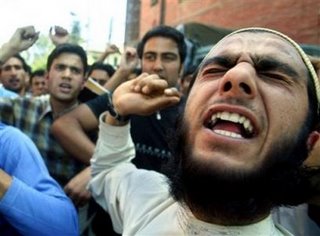 Thousands of protesters demolished the home of “Sabina”, a woman who ran a prostitution ring in Kashmir, and promised to punish the culprits involved in the scandal:

Hundreds of protesters hanging out of car windows and riding motorbikes drove through Srinagar chanting “Punish the culprits” and “Islam’s writ will run in Kashmir.”

Thousands of people also attacked the house of a woman accused by neighbours of organising the prostitution ring, set fire to furniture, clothing and appliances and tore down part of the building.

Police last month unearthed the alleged racket involving over 40 women whose clients included politicians, bureaucrats and businessmen in the conservative Muslim-majority state where a separatist revolt is raging.

Religious and separatist leaders along with newspaper editorials have been demanding that the client list be made public along with the names of two women and one man arrested.

The injuries occured when police fired shots to drive away the crowd from the house, injuring one of them, police said. Six others were hurt in the stampede that followed.

Later protesters pelted rocks at the police in retaliation. 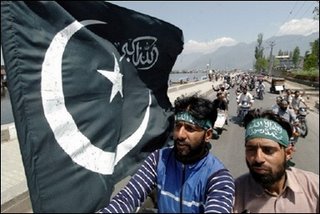 A day-long strike and protests to force the government to reveal the names of people caught up in a sex scandal paralysed Indian Kashmir on Friday.(AFP/Sajjad Hussain)

“Sabina’s” home was destroyed and her belongings torched in the violence. 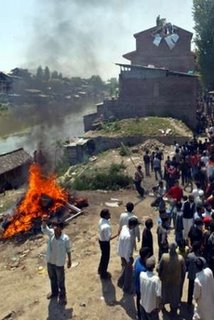 Protesters burn the belongings and destroy the house of Sabina (only one name given), a Kashmiri woman who has been charged for being involved in a sex scandal, in Srinagar May 5, 2006. Kashmiris are protesting against the scandal, which has been reported in the local media as involving some politicians, police officers and bureaucrats. A spokesman for the Jammu and Kashmir government told reporters in Srinagar that the state government has asked India’s federal police, the Central Bureau of Investigation, to investigate the reports. (REUTERS/Fayaz Kabli)