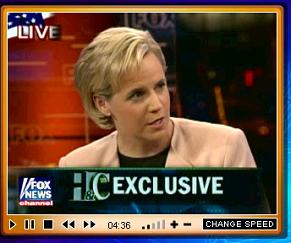 Mary Cheney says, “I am not a single issue voter.”

In a rare television appearance, the Vice President’s daughter, Mary Cheney talked about the attacks on her and her family during the last election in an interview last night with Hannity and Colmes.

She also declared that unlike many homosexuals in today’s society, she is not a one issue voter.

Mary Cheney has glowing remarks about her family’s acceptance of her lesbianism when she came out to them in high school:

The attention is welcome now, but it wasn’t during the 2004 presidential campaign, when her sexuality became, to her, an uncomfortable campaign issue.

Democratic presidential candidate John Kerry, his running mate, John Edwards, and various gay rights groups talked openly about her lesbianism. Cheney was just about the only person who didn’t.

“I’d made a commitment to the campaign,” says Cheney, who ran her father’s 2004 vice presidential campaign. “My job was to do whatever I could to help my dad. It wasn’t to be making policy statements of my own.”

But Cheney, 37, is now ready to share her feelings and opinions.

She writes about the day she told her parents she was gay: She had just broken up with her first girlfriend and wrecked the family car. Her parents, Cheney says, were supportive, unlike the parents of other gay people she knows whose families abandoned them.

Mary Cheney also talks about her father’s hunting accident and her views on gay rights:

She says the vice president is “a wonderful father and a wonderful grandfather, but he’s also a very private person in terms of family life.”

Cheney says that she loved writing Now It’s My Turn and that before she worked on her father’s vice presidential campaigns, she started writing a novel. It’s a political thriller that takes place in Washington and Moscow. “I had it pretty much outlined and have the first 50 pages written,” she says.

But the story many people want to hear is why she didn’t speak out about gay rights during the 2004 Bush/Cheney campaign, when Bush announced support for a constitutional amendment that would ban same-sex marriage.

She makes it clear in the book that she and her father did not and do not support the amendment.

Sadly, the left is still out attacking Mary on her sexuality even today.

Gay Patriot has been following the reaction to Mary Cheney’s book release.