Nobody likes a juicer… 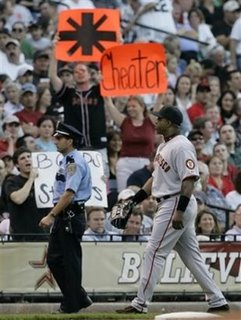 San Francisco Giants’ Barry Bonds is escorted by a police officer as he comes off the field while spectators hold up protest signs behind him during the Giants’ baseball game against the Houston Astros in Houston, Monday, May 15, 2006. (AP Photo/Eric Risberg)

San Francisco Giant’s player Barry Bonds is getting no love from the fans for his suspected steroid use as he approaches Babe Ruth’s home run record:

The 41-year-old Bonds, booed by Astros fans whenever he moved, began the day stuck at 713 homers and he hadn’t hit one in six games since a 450-foot shot to right May 7 at Philadelphia. He was also 0-for-15 since a seventh-inning single Tuesday night against Cubs left-hander Scott Eyre, and went 1-for-18 during the Giants’ last homestand.

Since his homer against the Phillies, his fifth this season, Bonds was 1-for-19. Booed as he stepped into the batter’s box Monday night, Astros rookie Taylor Buchholz quickly walked him.

He was booed loudly two more times when he made back-to-back catches in left field in the second. Fans waved yellow and green sheets of paper with asterisks printed on them — a reference to Bonds’ alleged steroid use and how many believe his milestones are tainted.

Another sign read “Barry: Brought to you by BALCO.” The Bay Area Laboratory Co-Operative was the supplier of designer steroids for many professional athletes.

Bonds has said he will decide later this year whether to return for the 2007 season or retire after 21 major league seasons. Bonds, who turns 42 in July, is in the final year of a five-year, $90 million contract.

Spectators hold up a sign while San Francisco Giants’ Barry Bonds bats during the first inning against the Houston Astros in Houston, Monday, May 15, 2006. Bonds is one home run away from hitting his 714th career home run and tying Babe Ruth for second on the major league all-time list. (AP Photo/Dave Einsel)