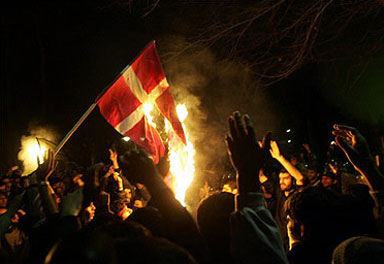 A new video by Al Qaeda posted on the internet calls for massive attacks on Denmark, Norway and France over the dreaded Muhammad cartoons:

A video by Al Qaeda called upon Muslims to attack Denmark, Norway and France for publishing cartoons of the Prophet Mohammed.

‘Muslims avenge your prophet …. We deeply desire that the small state of Denmark, Norway and France … are struck hard and destroyed,’ declared Libyan Mohammed Hassan, who escaped from US custody at Bagram airbase in Afghanistan last July.

‘Destroy their buildings, make their ground shake and transform them into a sea of blood,’ said Hassan, dressed in military fatigues and a black turban, and holding an assault rifle.

Hassan, also known as Sheikh Abu Yahia al-Libi, was one of four Arab terror suspects who broke out of the high-security detention facility at Bagram, the main US military base in Afghanistan.

Osama Bin Laden also used the Muhammaad cartoons as an excuse for attacks in his last video message:

The posting of the video comes three week’s after Al-Qaeda leader Osama bin Laden’s call in a video to boycott products from the United States and European countries which supported Denmark over the publication of the cartoons. 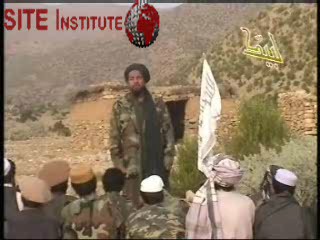 A 21:46 minute video containing the Eid al-Fitr sermon on the occasion of the end of Ramadan in 2005, spoken by Abu Yehia al-Libi (Mohammed Hassan) in front of a group of Afghan mujahideen, was distributed across several jihadist forums. The video depicts not only the speech, but a military training regime by those in attendance, in which al-Libi also participates. During the sermon, al-Libi assures that the American’s “noses will be rubbed in the dirt” and America will fall like the previous empires. (Site Institute)

This is not the Libyans first internet video. He put out another video warning Americans after his escape from Bagram air base:

One of four Arab militants who escaped in July from a heavily fortified jail at the main American base in Afghanistan on December 19 defied the US in an Internet-posted video. “America will be humiliated,” vowed Libyan Mohammed Hassan, who is known also as Sheikh Abu Yahia Al Libi, addressing a group of militants during celebrations of the Muslim feast of Fitr in November. The four Arabs, described by the US Army as “dangerous enemy combatants”, included Abdullah Hashimi from Syria, Mahmoud Ahmed Mohammed from Kuwait and Mahmoud Al Fathani from Saudi Arabia. Bagram base currently holds about 500 prisoners, including foreigners.

In November 2005, Abu Yehia al-Libi (AKA Abu Yehia Yunes al-Sahrawi) wrote a letter to Al Zarqawi saying news of his “accomplishments” buoyed hope in his heart while he was in prison in Afghanistan: 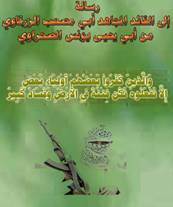 A 20-page letter from Abu Yehia al-Libi AKA Abu Yehia Yunes al-Sahrawi addressed to Abu Musab al-Zarqawi, Emir of al-Qaeda in Iraq, and dated November 23, 2005, was recently distributed amongst password-protected al-Qaeda affiliated forums. Al-Libi comments that though his incarceration in the “crusading prisons” limited the depth of the news he was able to receive of Zarqawi and jihad in Iraq, the impact of the information buoyed his hopes and that of fellow prisoners; to behold the entire scope of events in the jihad, subsequent to his escape, endeared Zarqawi to al-Libi, and prompted him to desire “to participate in your Jihad with my pen and my words – for I am incapable of doing so with my hand and my soul.” The letter then serves to laud Zarqawi as only a secondary point, underlying the primary issue of describing jihad and its role in establishing Islam and exposing the falseness of the enemy.

In later writings, Abu Yehia explains that Al Zarqawi is a man of truth:

Providing an example of one whom people have called “extremist,” Abu Yehia references Abu Musab al-Zarqawi, the emir of al-Qaeda in Iraq. He states that since Zarqawi was in Afghanistan, he was calling the Saudi government infidel and operating in excess to oppose Islamic law; however, Abu Yehia avers: “We bear witness to Allah that we know that the Mujahid Commander Abu Musab al-Zarqawi (may Allah preserve him) is innocent of what they say. Far from the extremism, irresponsibility, haste in takfir, no one like him needs such testimony… Abu Musab is known among his brothers as being one of the people of correct guidance and truth, humble among his brothers and strong against his enemies.“