How will the liberals defend their anti-military, anti-war “hawk” today?… Or will they back him on this crazy assertion, as well?

John Murtha said in an interview this morning on “The Early Show” that, “Iraq is worse than it was pre-war.”
Expose the Left has the video.

MURTHA: And I said there’s not only no progress, it’s worse than it was pre-war. This thing has been mishandled so badly. The american people need to hear…

This is a sick man!

And, instead of shaking her biased head in agreement, is a followup question too much to ask from the folks at CBS?

I’m just wondering… did Murtha interview any of the children Saddam tortured?

In 1991 Saddam killed 500,000 people when they rose against him. Nobody demonstrated against him then. Did John Murtha interview any of these families who lost loved ones?

Did John Murtha go look at any of the hundreds of mass graves in Iraq, lately?

Has John Murtha been to the Genocide Museum in Kurdistan?

Did John Murtha ask the current Mayor of Tal Afar, Iraq what he thought?

How twisted is it that the Monday after Iraq celebrates its first democratic and diverse cabinet, the day that Britain’s Prime Minister flies into Baghdad to congratulate the new government leaders, that John Murtha and his Democratic Party members wish a previous dictatorship where thousands were killed on average each month instead of a free democracy that we enjoy here in America? 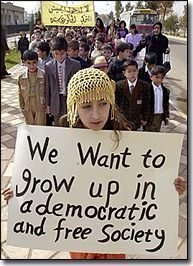 Thank goodness, Muhammed at Iraq the Model, who is living in Baghdad, is more upbeat than Mr. Murtha.