The mother of Zacarias Moussaoui lashed out at the US and France as racist and said her son did nothing!
VIDEO HERE

This nightmare in not over yet.
French lawyers for the mother of Zacarias Moussaoui will begin work to transfer Moussaoui to France to serve his prison sentence. 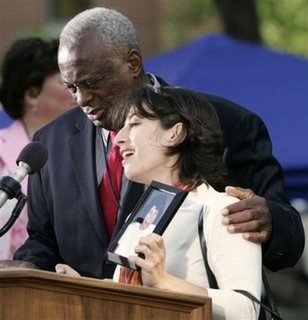 Carie Lemack, right, holds a photo of her mother Judy Larocque, who was a flight attendant on one of the hijacked planes, is given a hug by Abraham Scott, left, whos wife died in the Pentagon, outside the federal district courthouse on Wednesday, May 3, 2006 in Alexandria, Va. A federal jury rejected the death penalty for al-Qaida conspirator Zacarias Moussaoui on Wednesday and decided he must spend life in prison for his role in the deadliest terrorist attack in U.S. history. (AP Photo/Evan Vucci)

The Washington Post is reporting that Paris may ask the US to allow Moussaoui to serve his sentence in France:

France may ask the United States to allow September 11 conspirator Zacarias Moussaoui to serve his life prison sentence in a French jail, the Foreign Ministry said on Thursday.

Moussaoui, a 37-year old French citizen of Moroccan origin, was sentenced on Thursday to life in prison with no possibility of release, a day after a jury spared his life and rejected U.S. government arguments that he should be executed.

France and the United States signed two agreements in the 1980s about the transfer of convicts. Moussaoui’s mother and his lawyer want him to be allowed to serve his sentence in France.

“A possible demand for transferring Zacarias Moussaoui could be looked at within this framework,” Foreign Ministry spokesman Jean-Baptiste Mattei said at an electronic press briefing.

“But in any case, we have to wait for the American justice system to provide a definitive sentence and to define the conditions of the sentence,” he added.

Moussaoui’s French mother claims her son is innocent and says she will fight to bring him back to France where the maximum sentence may be 10 years:

Launching a media blitz to proclaim her son’s innocence she told French radio earlier today she would fight to bring him back to his native France. Aicha El Wafi said the conviction was “the worst thing that could happen to a mother”.

Asked how she felt after hearing of the conviction, she said: “I feel nothing. I am dead because my son was wrongly convicted.”

Her lawyer welcomed the decision not to impose the death penalty, saying that would have “added barbarity upon barbarity”. He said that if the trial had taken place in France, Moussaoui would not have received more than ten years in prison.

So, just as many people feared, this tragic story is far from over despite what Judge Leonie Brinkema said to the 9-11 terrorist today in court.

Captain Ed reports that the French have already asked to have Moussaoui moved to France.

No Pasaran’ are not sympathetic to the tears of El Wafi.