Wow! Here is some very encouraging news translated by Iraqi-American Haider Ajina from the Iraqi media. Iraqi Sunni, Shia and Kurdish tribal leaders are meeting today to sign a pact to unite and fight terror! 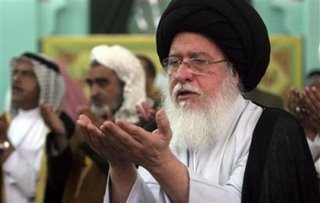 After the news yesterday of Al Qaeda weakening in Iraq, where every year is worse than before, comes this good news today from Haider Ajina.

The following is a Haider Ajina translation of news in Iraq’s May 10th addition of Almada.

Over 200 Iraqi tribal leaders will meet in Baghdad on Wednesday may 10th to sign an honor compact to denounce and reject terrorism and sectarian violence.

Tribal leaders announced they will meet in Khademiah Baghdad on Wednesday May 10th at a conference. This conference will result in an honor compact obliging Iraqi tribes to cooperate amongst each other and the authorities to protect their members from terrorist attacks, and to help with national unity and condemning sectarian violence.

The “Foundation for Humanitarian Dialogue” sponsored and organized the conference. Husien Ismail Alsadar who uses Khademiah as his center of activities and enjoys the backing and blessing of Al Sistani is the foundation’s president. Some Sheiks and tribal leaders said they hope that a committee can be formed to represent Iraqi tribes in the “National accord conference” on June 10th along with the honor compact signed by tribal leaders.

A foundation speaker said that the conference will be attended by heads of Tribes from all of Iraq, Arab Kurd and Turkmen tribes. The speaker added that the conference will also discus political, security, and social issues in the country. We hope to come up with ideas and plans to cooperate in stopping terrorist activities affecting the citizens. He pointed out that the honor compact to fight terrorism and denounce sectarian violence would be the main results of this conference.

The Kurdish, Sunni and Shia tribal leaders joined for a prayer after the meeting. 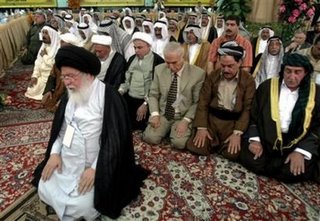 Prominent Iraqi Shiite cleric Hussein al-Sadr, left, leads the prayer following a meeting of tribal chiefs from different parts of Iraq, in Kazimiyah mosque, a northern Baghdad suburb, Wednesday, May 10, 2006. Iraqi Shiite, Sunni Arabs and Kurds attended the meeting followed by joint prayer. (AP)
(It is strange what the AP omits from their description of this event.)

This news adds to the mounting evidence that Iraqis are united, they are united in their quest for defeating terrorists who hope to destroy the fledgling democracy, they are united in fighting sectarianism (which was encouraged and fostered by the Baathists) and united in wanting their democracy to succeed and thrive.

No evidence of civil war, no evidence of splitting up the country and no evidence in giving in to the terrorist. This is a very important conference of all the leading tribes in Iraq. Arab, Kurd, Turkmen, Muslim, Christian, Shiite & Sunni all getting together with a common goal. Defeating terrorism, affirm national unity and condemning sectarianism. All working together and promising to help and protect each other. This is the greatest defeat to Zarqawi and his group as well as the remaining Baathists.

ABC News is carrying the story, now, including this:

Dressed in outfits ranging from business suits and ties to traditional Arab robes and head scarves, the tribal leaders and Sunni Arab, Shiite and Kurdish clerics met at Al-Hashimi mosque in northern Baghdad. At one point, they knelt on a carpet to pray together in a unified ritual.

** But get this! from a report on the meeting:

Shiite Leader Al-Sadr (the other Al Sadr) said U.N. and Arab League envoys had been invited to attend the meeting and he was disappointed they had not shown up!

Here is another headline and article from the Iraqi newspaper Azzaman from May 9th.

Mosul police are striving to regain full control of the restive city of Mosul, a stronghold for anti-U.S. rebels and armed groups. Lt. Gen. Wathiq Mohammed has asked his police officers to “be strict and forceful in their bid to apply the law.”

On Monday the police joined forces with units from the Iraqi army and closed main streets in the city leading to heavy traffic jams. Many civil servants could not reach their offices and students missed classes as a result. Eyewitnesses said the city came to a standstill most of the day.

Security sources, speaking on condition of anonymity, said the deployment was part of “a security campaign” to return normal life to the city. They said the authorities wanted to cordon off armed groups and put an end to violence. Several such campaigns were conducted in the past but all have failed to contain violence.

A roadside bomb on Monday killed three policemen and injured several others in the city’s industrial district where rebels have the upper hand.

Mohammed, the police boss, said there would be no let-up in the struggle “against terrorists and unruly gunmen.”

Speaking at the police academy during a graduation ceremony, he said his forces will press ahead with their campaign until they have the city under control. “The troops will continue searching houses, moving from one street to another,” he said. He added: “We say to these criminals that you have no place among us and the time to impose law and order has come.”

Iraqi security forces and their leaders are determined to bring law and order to their cities. They do this while respecting the rule of law. This is very different from the way Saddam enforced security. Saddam’s forces set one Iraqi against the other, captured tortured and killed innocent civilians, terrorized whole neighborhoods etc. Current security forces get much support from the average Iraqi, and are called on to rid neighborhoods from terrorist and criminals. Citizens also volunteering to join these forces, they are not conscripted or dra
fted, another tremendous difference from the day of Saddam.

And, in other good news…
It’s not just the American stock market that is booming! 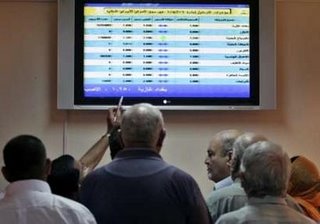 Iraqi stock traders and investors view an electronic board inside the Iraqi Stocks Exchange in Baghdad May 10, 2006. Iraq?s stock market is open on Mondays and Wednesdays. (REUTERS/Thaier al-Sudani)

Also today…
The UPI is reporting that, “Some 3,500 soldiers of the U.S. Army’s 2nd Brigade were ordered to stay in Germany while a U.S. force reduction in Iraq is considered, a report said Tuesday.”
And,… the Iraqi Parliament is in session today. The new cabinet will be announced soon.

Blue Crab Boulevard is excited about this news.
Mudville Gazette also has this news up today.
The Media Blog at National Review Online has more good news our soldier’s survival rate.
All Things Conservative shares more good news from the Brookings Institute.