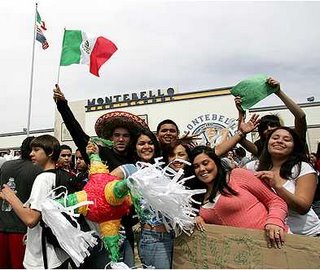 …Haven’t helped the amnesty cause much. (Michelle Malkin)

A FOX News Opinion Dynamics Poll released today says that nearly two-thirds of Americans believe the country needs to do a better job on securing the border after watching the national protests on Monday:

On the issue of immigration, the poll asked how people felt when they saw the thousands of participants in Monday’s “A Day Without Immigrants” protests. By three-to-one Americans say it made them think the United States needs to do a better job protecting the country’s borders (63 percent) rather than that the participants should be given rights and made citizens (21 percent).

And on a related question about the recent release of a Spanish-language version of the U.S. national anthem, there is widespread agreement — 78 percent say the anthem should only be sung in English, while 16 percent think it is okay for it to be sung in Spanish as well.

Americans prefer the House of Representatives’ enforcement-only bill by 2-1 over Senate proposals to legalize illegal immigrants and greatly increase legal immigration. The poll was conducted for the Center for Immigration Studies.

Nationwide rallies, protests, and boycotts on Monday had little if any impact on public opinion. To the degree that there was any movement, it was not what the organizers intended.

Support for an enforcement first policy was 67% before the marches, 66% after.

81 percent of respondents in a Gallup poll last month agreed with one of the central tenets of the opposition: that illegal immigration is “out of control.”

Meanwhile, black leaders are complaining that Mexicans and other Hispanic nationals are getting preferential treatment over peoples from countries with largely African-descended populations.

And Asians and Asian-Americans are speaking out on issues such as reducing the wait times for visas for family members or green cards for skilled workers.

VDare talks about how Mexicans in Mexico took the May Day protests.
Hat Tip Papa Ray