No Blood for Cable TV!

No kidding!
Cable Company workers protested against Islamic militants who promise to launch suicide missions if the cable company does not change it’s lineup! 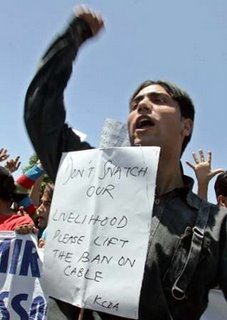 A member of Kashmir’s Cable Operators shouts slogans during a protest in Srinagar, May 13, 2006. Islamist guerrillas in Indian Kashmir threatened on Friday to launch suicide attacks on cable TV relay centres in the region if they did not shut down. (REUTERS/Danish Ismail)

Islamic militants promised to reign terror on the obscene cable companies if the companies did not shut down or stop airing obscene programming!

Cable operators in Indian Kashmir marched through the streets calling on Islamic militant groups to lift a ban on broadcasts that the rebels have branded “obscene.”

Militants have banned cable channels several times since 2000 but broadcasts have always returned after operators pledged they would not show obscenity — deemed to be scenes of kissing and fondling and women wearing revealing clothing.

Hoisting banners reading, “Do not snatch our livelihood. Please lift the ban,” around 150 operators marched through the streets of main city Srinagar chanting slogans including “We want justice.”

There is no strong evidence linking the Islamic radicals with the regional satellite TV corporation. 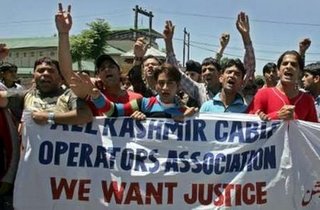 Members of Kashmir’s Cable Operators shout slogans during a protest in Srinagar May 13, 2006. (REUTERS/Danish Ismail)

Kashmir erupted with violence this past month when news spread by cellphone of a hostile that was serving businessmen and politicians in the region.