Poor Ronald McDonald gets picked on at the “Day Without Gringos” protest in Mexico City even though the local stores are Mexican owned. 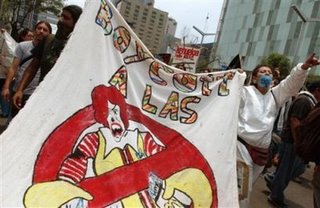 Student supporters of the Zapatista National Liberation Army, EZLN, carry a banner calling on a boycott on U.S. owned multinational companies during a march in Mexico City, Mexico on Monday May 1, 2006. Zapatista leader Sub Comandante Marcos joined calls to boycott U.S. goods in what was dubbed a ‘A Day Without Gringos’, an action timed to coincide with a call for immigrants to boycott work, school and shopping in the United States.(AP Photo/Jennifer Szymaszek)

Many Latin American countries held “A Day without Gringo” protests to coincide with the May Day immigrant protests in the US:

Rallies, road blockades, boycotts and other actions are planned South of the US-Mexico border in solidarity with the “Day Without an Immigrant” campaign inside the US – a nationwide boycott and labor strike of immigrants and their supporters.

In early April, after a series of massive, highly publicized marches in cities across the US, representatives from various immigrant-rights groups met with their Mexico and Central and South America-based counterparts in at least two separate summits, in Arizona and California, to plan for the “Day without an Immigrant.” The primary demand of those alliances, and the throngs that have joined them, is “full amnesty and dignity for the millions of undocumented workers presently in the US.”

“There are 12 million people living in this country who are undocumented because of unfair and unjust laws,” explained José Oliva, coordinator of the National Network of Worker’s Centers, a Chicago-based project of Interfaith Worker Justice that works to organize and educate low-wage workers. “It’s a civil rights issue. It is an issue of people’s rights to be recognized as human beings.”

Vandals spray-painted a US bank in Mexico City today. 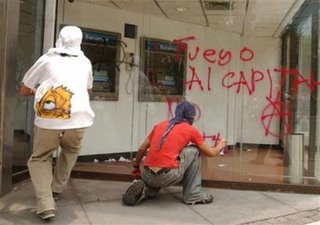 Student protesters paint graffitti outside of a U.S. owned bank during a march in Mexico City, Mexico on Monday May 1, 2006. A day-long protest dubbed ‘A Day Without Gringos’ drew thousands of Mexicans into the streets and kept many away from U.S.-owned supermarkets and fast-food restaurants to support rallies in the United States demanding immgration reform. (AP Photo/Jennifer Szymaszek)

In Mexico, trade unions, groups of activists and lawmakers offered their total backing for the demonstrations that migrants in the United States will hold on Monday to demand amnesty for undocumented immigrants and to protest a strict immigration reform bill passed by the lower house of Congress.

Immigrant rights groups are also organising a national boycott, urging immigrants in the United States to stay home from work and school, and not to buy or sell anything on Monday. The idea is for immigrants to make their economic clout felt.

A quarter of formal private-sector jobs with regular pay in Mexico are provided by U.S. firms. 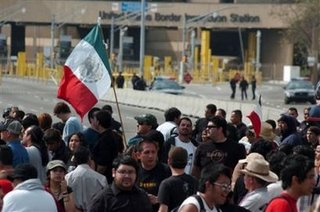 Earlier in the day protestors had blockaded part of the border crossing from Tijuana to San Diego, California, and later successfully blocked the entire vehicle border crossing for a short time. (AP Photo/David Maung)

At least half a dozen Mexican governors joined the boycott of hundreds of American goods and services today in support of the “Day without Gringos” protest today. 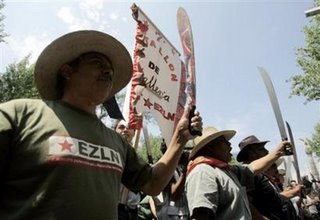 Members of the Zapatista National Liberation Army (EZLN) hold up their machetes as they protest in front of the U.S. Embassy in Mexico City, Mexico on Monday May 1, 2006. (AP Photo/Eduardo Verdugo)