Volunteers for the Minuteman Project help put up a fence outside of San Diego this weekend,
VIDEO HERE

As one group prepared to protest for amnesty, another group went to work on a fence outside of San Diego over the weekend. 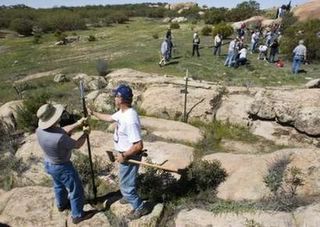 Two ‘Minuteman Project’ volunteers position a fence post as part of a project to build a fence along the US/Mexico border, to keep out undocumented immigrants, in Boulevard, California April 29, 2006. There is a fence erected along part of the border in the area, but the ‘Minuteman Project’ wanted to bridge the gaps with a privately financed fence of their own built between the government built sections. More than 100 volunteers participated in the daylong event. Boulevard is about 65 miles (104.6 km) east of downtown San Diego. (REUTERS/Fred Greaves)

As illegal immigrants and their supporters get ready for massive protests today demanding amnesty, a group of Minutemen volunteers put up a makeshift fence outside of San Diego, this weekend:

About 200 volunteers organized by the Minuteman Civil Defense Corps of California began building a 6-foot barbed wire fence Saturday along a quarter-mile stretch of rugged terrain in Boulevard, which is located 50 miles east of San Diego.

Tim Donnelly, the group’s leader, said volunteers ate apple pie and hot dogs as they worked on the fence, which was connected to an existing 12-foot high fence previously built by the federal government.

The volunteers wanted to send a message to Congress that the government should block entry to the United States and not grant amnesty to illegal immigrants, Donnelly said.

Another day doing the job that Congress refuses to do. 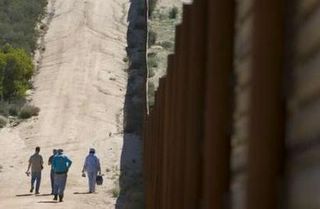 ‘Minuteman Project’ volunteers walk along an existing section of border fence on the way to help in a project to build a privately financed fence along the US/Mexico border, to keep out undocumented immigrants, in Boulevard, California April 29, 2006. (REUTERS/Fred Greaves)

Minutemen leader Chris Simcox said there are already about a half dozen landowners who will allow the fencing.