Good Riddance!… You ought to fit right in!

…Where the people respect Human Rights!

The grumpy Imam continues: “I donÂ´t think human rights as muslims in Europe is possible”. Laban opines he has been coming in for unwarranted criticism for the Muhammad controversy.

Sugiero (who translated this news from Jyllands-Posten) has much more on Denmark’s sad farewell to a terror-loving thug. 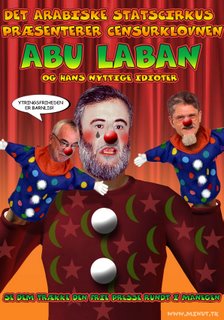 An Imam Abu Laban cartoon at Arkaisk.dk after the Danish press reported how he made up lies to stir up Muslim unrest towards Denmark.

Later, a secret tape recorded the Imam with his child-beating cohort, Ahmed Akkari,talking about how they were going to “blow up” a popular Moderate Muslim Parliamentarian, Naser Khader.

The American press is yet to accurately report how these Imams and their extra cartoons are responsible for the deaths and rioting in the Mideast by their outrageous lies.

Gates of Vienna has more on this “Good News from Eurabia.”

Update from On the Wing (via LGF):

Abu Laban- “I could have created a hell here in Denmark. I could have encouraged Muslims to strike. I’ve tried to be a good guest in this country in every way. But I’ve been treated extremely poorly by the other side.”

The Futurist has a thought or two on this.