You’ve put a huge light on this and many people want the truth and many want to put it in the closet, just walk away. There was a great Republican president who once said, if you just give the people the truth, the republicans, the Americans will be saved. […] I dedicate this Palme d’Or to my daughter, to the children of Americans and to Iraq and to all those in the world who suffer from our actions. “ 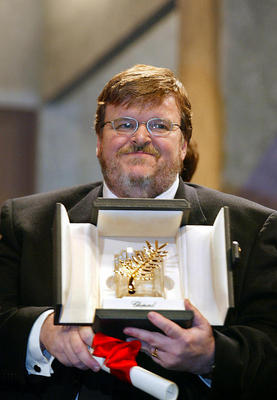 This is nothing new to most of us but now Michael will have to pay.

Sgt Peter Damon may have lost his arms but he is not letting Michael Moore take his honor! 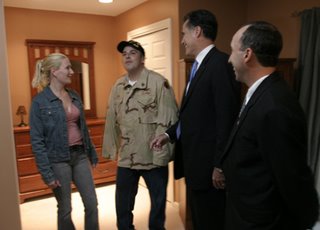 Sgt. Peter Damon and his wife Jenn gave Governor Romney a tour of the home that was specially built for their family by Homes for Our Troops.

Michael Moore’s lies are coming back to haunt him and his wallet:

A double-amputee Iraq-war vet is suing Michael Moore for $85 million, claiming the portly peacenik recycled an old interview and used it out of context to make him appear anti-war in “Fahrenheit 9/11.”

Sgt. Peter Damon, 33, who strongly supports America’s invasion of Iraq, said he never agreed to be in the 2004 movie, which trashes President Bush.

In the 2003 interview, which he did at Walter Reed Army Hospital for NBC News, he discussed only a new painkiller the military was using on wounded vets.

“They took the clip because it was a gut-wrenching scene,” Damon said yesterday. “They sandwiched it in. [Moore] was using me as ammunition.”

Damon seems to “voice complaint about the war effort” in the movie, according to the lawsuit.

But what the father of two from Middleborough, Mass., was really talking about was the “excruciating” pain he felt after he lost his arms when a Black Hawk helicopter exploded in front of him.

Damon wasn’t expressing any opinion about the war, the suit charges, but rather extolling the drug.

It takes a despicable human being to use a man’s pain and then twist it for your own political gain. Michael Moore is just that person.

How much play will the mainstream news give this story? Ya think as much as they gave the Cannes Palme d’Or Winner in 2004!

And, what will the French say?