“I share your sense of optimism, Mr. President, about the future. The world will need America just as much in the future as the world has needed America in the past, and as the world needs America at the present. Those foolish enough to suggest that America should have a lesser role in the affairs of the world should pause and think whether they really mean what they say, because a world without a dedicated, involved America will be a lesser world, a less safe world, a more precarious world.”

“And if I have a single message for the people of your great country, and that is: The world continues to need America, and the world will be a better place for the involvement and the commitment of the people of the United States of America in the years that lie ahead.” 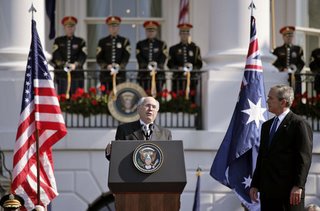 Prime Minister John Howard speaks during the State Arrival Ceremony held in his honor on the South Lawn Tuesday, May 16, 2006. “Terrorism respects no value system; terrorism does not respect the tenets of the great religions of the world; terrorism is based on evil, intolerance and bigotry,” said Prime Minister Howard of America and Australia’s efforts in the War of Terror. “And no free societies, such as Australia and the United States, can ever buckle under to bigotry and intolerance.” (White House photo by Paul Morse)

Prime Minister John Howard of Australia has been America’s staunchest ally in the War on Terror and proved it once again with his strong words yesterday in Washington:

We remain a steadfast ally of the United States in the war against terror. I’ve made that clear on every occasion I’ve spoken here in the United States. The war against terror will go on for a long time; I think we have to accept that. Progress is being made. The challenge remains very, very strong and there needs to be a continued commitment. And we admire and respect the leadership given by you and by the United States in that war. And it’s a war that confronts us all. Those who imagine that somehow or other you can escape it by rolling yourself into a little ball and going over in the corner and hoping that you’re not going to be noticed are doomed to be very, very uncomfortably disappointed.

And I spoke about the situation in East Timor and the Solomon Islands, and the importance of the role of Indonesia. The symbolism and also the practical consequence of Indonesia being the largest Islamic country in the world, and, therefore, the success and prosperity of moderate Islamic leadership in that country is itself a very important factor in the long-term success of the fight against terrorism, because the fight against terrorism is not only a military and physical one, it is also an intellectual one. And it’s a question of providing within the Islamic world a successful democratic model as an alternative to the fanaticism of those who would have seemly invoked the sanction of Islam to justify what they seek to do.

Can I finally say that the many ties that bind Australia and the United States, as I said on the lawn earlier today, and none are more important, of course, than the shared values and the beliefs that both of our countries have that the spread of democracy around the world is an important goal and an important responsibility. It’s been a privilege for our two peoples to enjoy democracy in an uninterrupted fashion for so long, that we tend to take it for granted. And we forget its liberating impact on those who taste and experience it for the first time. And both of our societies have a responsibility in expanding the opportunities for democracy, and that, of course, lies very much at the heart of much of what our two societies do. 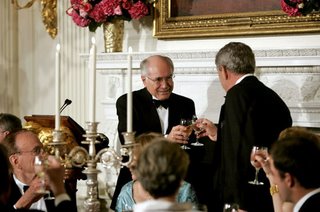 Later in the day, at another press conference, John Howard’s statements were more directed to the opponents of the War on Terror:

The war against terror will go on for a long time; I think we have to accept that. Progress is being made. The challenge remains very, very strong and there needs to be a continued commitment. And we admire and respect the leadership given by you and by the United States in that war. And it’s a war that confronts us all. Those who imagine that somehow or other you can escape it by rolling yourself into a little ball and going over in the corner and hoping that you’re not going to be noticed are doomed to be very, very uncomfortably disappointed.

America has no better friends than the Aussies!

And, Australia continues to make sacrifices in the War on Terror. Earlier this month, Australia said goodbye to Jake Kovco, the first Aussie killed in Iraq.

Meanwhile, The Australian was talking about the attractive “Lady in Red” who arrived at the DC dinner last night with John Howard’s youngest son.