The latest bunch of suicide bomber hopefuls completed their training and celebrated their graduation in Tehran…
It was a blast! 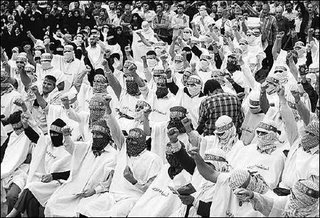 Iranian men wear shrouds to show their willingness to give their lives for their country and Islam at a gathering in south Tehran on Thursday. (HASAN SARBAKHSHIAN/Associated Press)

This year’s commencement had a more serious tone than the previous suicide bomber graduations:

Under a banner showing coffins draped with U.S., British and Israeli flags, more than 100 Iranian men and women pledged Thursday to become suicide bombers, if necessary, to defend their country and Islam.

The event, held in a burial area for war dead and martyrs, was similar to others in recent years, with Islamic chants and songs and volunteers donning white coverings to symbolize their willingness to die.

But this gathering — coming at a time when many Iranians worry their country could come under attack by the United States or Israel — was tailored to send a message of defiance against any possible military action over Iran’s nuclear program.

“The threats from America have swelled our ranks and given us added conviction,” said 27-year-old Margess, who like the other volunteers would only give her first name and used a scarf to cover all but her eyes. “We will stand up against them with our lives.”

Maybe there is someone at Reuters who could help them find work?

Pajamas Media has links to more pictures from the strange commencement ceremony.

This makes for an awkward class reunion… “You still here?”