Stefania has this shocking news at Publius Pundit.
** This story is absolutely vile! **

Three Italian heroes were murdered in a terror attack in Nassiryiah on April 27, 2006. Italian intelligence officials now say they have information on this attack that implicates Iran and Italian communists. 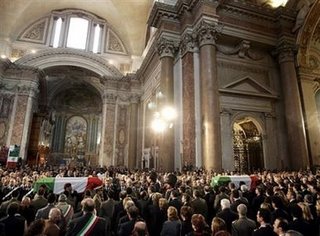 An article on L’Opinione reports (in Italian) that anti-globalization and communist groups based in Italy, among which is the infamous “anti-imperialist camp” (that collecting “Euros for the Iraqi resistance”) coordinated with Islamic terrorists in Iraq to attack our troops in Nassiryiah. The Italian intelligence heard phone conversations in which the red fundamentalists instructed the Islamists about how and when to kill our soldiers. It seems that the attack was organized in order to pressure Mr. Prodi to speed the pullout from Iraq.

When the bodies of the three fallen heroes were on display in a governmental palace in Rome, the dead’s colleagues (Carabinieri) were unwilling to accept the “condolances” from Prodi and his Leftist colleagues. 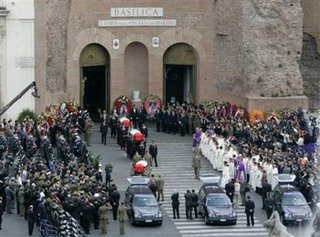 The coffins of three Italian soldiers killed in Iraq last week are carried outside of the Santa Maria degli Angeli Basilica in central Rome at the end of a state funeral, Tuesday, May 2, 2006. Italy’s president, premier and leader-in-waiting Romano Prodi attended a state funeral on Tuesday for three Italian troops killed by a roadside bomb in Iraq last week. The three Italian victims were Nicola Ciardelli, 33, an army paratrooper,(coffin in foreground) and Franco Lattanzio and Carlo De Trizio, both warrant officers with the Carabinieri.(AP Photo/Pier Paolo Cito)

The Washington Times reported on the Iranian connection to these killings in Nassiryah:

Iranian agents were accused yesterday of masterminding a bomb attack that killed three Italian soldiers in Iraq last week and intensified political pressure for the incoming government to speed up its withdrawal of troops from that country.

Thousands of politicians, soldiers and police solemnly filed past the coffins of the three soldiers at a chapel at Rome’s Celio military hospital yesterday. An honor guard from Italy’s Corrazieri cavalry regiment stood stiffly by the coffins, each draped with the Italian tricolor flag and the swords and berets of the dead.

The soldiers, whose deaths are being treated as a national tragedy, were killed on Thursday by a remotely detonated roadside bomb that exploded next to their armored vehicle near Nasariyah in southern Dhi Qar province. Pathologists said temperatures in the vehicle exceeded 5,000 degrees.

The newspaper la Repubblica yesterday quoted officials of the Military Intelligence and Security Service, known by its Italian acronym SISMI, saying the attack was organized by Iranian agents, who were first spotted in the province in early April.

The SISMI sources were quoted as saying the Iranians met with radical Shi’ite leaders to plot that attack and another roadside bomb that exploded near three Carabinieri paramilitary police armored vehicles close to a bridge over the Euphrates River on April 22.

A spy in a local police station evidently provided the Iranians with the route to be taken by the soldiers’ convoy. Iraqi officers at the Nasariyah police station were trained by the Italian contingent, but many are considered unreliable.

“The Tehran government was the direct mastermind of Thursday’s attack, not just a political reference point,” la Repubblica said. It said plans for Italy to withdraw all its forces from the country by the end of this year “makes it [essential] for Tehran to dominate the radical guerrilla panorama in southern Iraq.”

On May 1, 2006, Italian Communists in Milan took to the streets for their workers day parade and chanted…

The new Prime Minister-designate Romano Prodi and his Leftist alliance in Italy including the communist parties are already talking about withdrawing troops from Iraq this summer:

The attack Thursday was the worst on the force since November 2003 when 19 Italians, mostly Carabinieri, were killed in a suicide attack in Nasariyah. Italy has about 2,600 troops in Iraq.

Oliviero Diliberto, head of the Italian Democratic Communist Party, a coalition partner of Prime Minister-designate Romano Prodi, said the new government could withdraw all Italian forces from Iraq by this summer.

Mr. Prodi “completely agrees with me” on speeding up withdrawal, he said.

Pope Benedict XVI, expressed “deep sorrow” over the deaths and praised the victims’ commitment to peace in Iraq.

The Mudville Gazette has more on the Iranian connections in Iraq.
In the Bullpen has thoughts on patriotism.
Pajamas Media is carrying this story.