Wow! What a statement! There is no way that man is guilty! 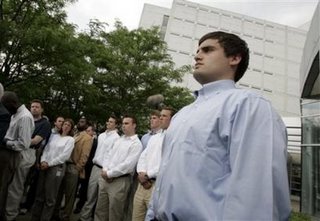 David Evans, right, senior captain of the Duke lacrosse team stands with other senior members of the team in front of the Durham County Detention Center before turning himself in Monday, May 15, 2006 in Durham, N.C. Evans was the third player indicted for the sexual assault of an exotic dancer.(AP Photo/Gerry Broome)

The mainstream media does such an injustice by not printing this young man’s full statement!

“My roommates and I helped them find evidence for almost an hour, and told them that if they had any questions we would gladly answer them to show that nothing happened that night,” Evans said.

Evans said he also gave a statement to Durham police without a lawyer present “because I knew that I had done nothing wrong and did not feel that I needed an attorney.”

Evans said he submitted DNA samples to police and turned over his e-mail account and other information in an attempt to prove his innocence. Evans said police declined his offer to take a police-administered polygraph. Instead, he said he took a polygraph administered by a former FBI official, “and I passed it absolutely.”

Addressing reporters at the news conference, Evans said, referring to the charges made against him and two teammates: “You have all been told fantastic lies.”

For the record, I do not think this is a white and black thing as others in the mainstream have made it.

You really have to wonder what this prosecutor has? All of the players were cleared through DNA evidence. One player has a fool-proof alibi of taxi rides, phone calls, ATM and dorm monitoring.

The team captain who was just indicted was described by the accuser as having a mustache which he has never had… What does the prosecution have besides the statement of a woman who was later too drunk to get out of a car?

La Shawn Barber has been following the story.
TigerHawk is on the same page.