Forget the Evil Genius Karl Rove!… Tony Snow is taking over!
Look out!

President Bush will speak to the country on Monday Night at 8:00 PM EST:

“This is crunch time,” Tony Snow, the new White House press secretary said Friday at his first off-camera, or informal, briefing. The address will begin at 8 p.m. EDT and is expected to last about 20 minutes.

The White House this is the first time it has requested network time for a presidential address on a specific domestic issue.

Majority Leader Bill Frist earlier this week said he would bring legislation to the Senate floor on Monday that would put “Border Security” first. 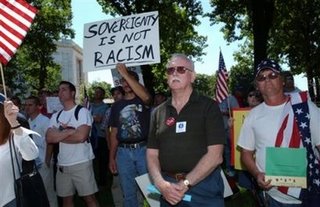 The frequently attacked members of the Minutemen Project ended their cross country tour today. The Minutemen have no affiliation with, nor do they accept any assistance by or interference from, separatists, racists, or supremacy groups. 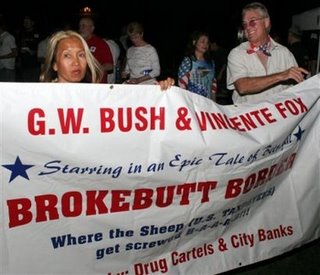 Angie Ibbotson, left, of Huntington Beach, Calif., and Chris King, of Phoenix, stand with a banner made by Ibbotson, during a Minuteman rally Wednesday, May 3, 2006, at the state Capitol in Phoenix. (AP)

The Pentagon has begun drawing up plans to send troops and equipment to the U.S. border with Mexico, where hundreds of thousands of migrants enter the country illegally each year, a defense official said on Friday.

Let’s hope that President Bush got the message!

John Stephenson has more on this.

Pajamas Media has a roundup from around the internet.