While CNN was propping up Ray McGovern as the new “Cindy Sheehan with facial hair”, Ray was spewing out anti-Semitic drivel over at MSNBC’s The Situation with Tucker Carlson.

Ray McGovern delivers mock indictments through a fence to guards at the White House. You would think this might send up a red flag to the mainstream media! 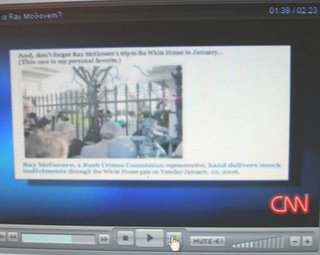 From a blurred Gateway Pundit as seen on CNN.

So “Who is Ray McGovern?”… Not the “Truth to Power” hero that CNN portrayed to its shrinking audience,
CNN VIDEO HERE
CNN transcript HERE.

CNN white-washed the Left’s new Cindy Sheehan with a beard in its video clip on Ray McGovern, painting the far-left and fiercely Anti-Semitic, full-time foot soldier in the army of antiwar left as the new voice of truth and reason in its segment titled “Who is Ray McGovern?”:

CNN: McGovern is the founder of Veteran Intelligence Professionals for Sanity, a group of 54 former analysts from the CIA and other intelligence agencies.

CNN stops there rather than mention that the Anti-War group encourages those working in the intelligence community to leak information even though it is illegal and CIA officers take a secrecy oath when they join the agency. 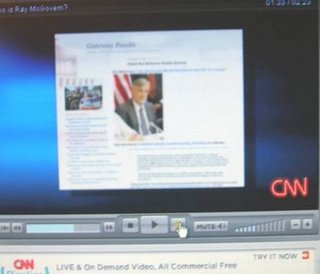 Another Gateway Pundit shot from the “Truth to Power” piece on Ray McGovern at CNN.

McLaughlin: Ray McGovern is a very respected analyst, who was always outspoken, entitled to his views and he is not shy of controversy.

CNN: The Conservative Blogs are all over McGovern describing him as a nutjob with extreme views on a variety of topics, highlighting how back in January he tried to deliver a set of mock indictments to the White House. How does McGovern feel about such “Extreme” criticisms?

McGovern: That’s true. We have extreme views. You see we’re brought up in a culture that’s really exemplified by the inscription in the marble right at the entrance of the CIA headquarters that says “you shall know the truth and the truth shall set you free.”

And, sometimes that truth comes from pieces of illegally leaked intelligence urged by your Anti-Semitic leftist group against the War in Iraq!

Roberts: What’s interesting about Thursday’s exchange and the vilification of McGovern is that in arguing with Rumsfeld, he did appear to have the facts on his side. So, what is really at issue here is the tone, speaking “Truth to Power” to some, is just plain rude to others!!!!

Truth to Power??? How is that? You would think that the analysts at CNN could explain this a bit further since they just gave the fulltime peace activist McGovern the nod over Defense Secretary Donald Rumsfeld! Maybe they would if they had something to back it up! 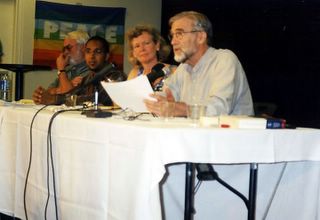 Tom Joscelyn: Nowhere in the CNN segment did they mention all or any of McGovern’s wacky statements and opinions.

There was no “Truth to Power” in what Ray McGovern said. This was just another attempt by the Left to pick and choose sentences to rehash their dated and offensive argument that the the administration lied about WMD to the world.

The Warden broke down McGovern and the Left’s lame argument best, yesterday:

As usual, when I check up on what the lefties are screaming about, I find nothing but mendacity.

All the nutjob defenders keep offering up this quote from an ABC Interview on March 30, 2003, as proof that Rumsfeld lied.

SEC. RUMSFELD: Not at all. If you think — let me take that, both pieces — the area in the south and the west and the north that coalition forces control is substantial. It happens not to be the area where weapons of mass destruction were dispersed. We know where they are. They’re in the area around Tikrit and Baghdad and east, west, south and north somewhat.

(The interview is usually truncated here. But when one reads the rest, you’ll see that Rumsfeld has qualified his position.)

Second, the facilities, there are dozens of them, it’s a large geographic area. It is the — Answar Al-Islam group has killed a lot of Kurds. They are tough. And our forces are currently in there with the Kurdish forces, cleaning the area out, tracking them down, killing them or capturing them and they will then begin the site exploitation. The idea, from your question, that you can attack that place and exploit it and find out what’s there in fifteen minutes.

I would also add, we saw from the air that there were dozens of trucks that went into that facility after the existence of it became public in the press and they moved things out. They dispersed them and took them away. So there may be nothing left. I don’t know that. But it’s way too soon to know. The exploitation is
just starting.

The Warden Comments: So, Rumsfeld is saying, there were WMD’s stored at these sites, but we saw some trucks moving in and out, so they may no longer be there.

Is this quote proof that Rumsfeld is lying? Of course not. If the WMD’s were indeed carted off, then the assertion is correct. Credible evidence exists for this possiblity. Whether or not it is a probability is a matter of opinion.

But no, the lefties would rather stand up and scream liar at those with whom they disagree. The audacity to then snivel that others are “smearing” those who make these accusations takes a special type of shameless audacity that only leftists seem to possess.

Peas in a pod? 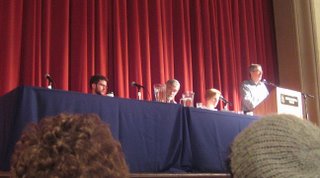 Zombie attended a moonbat event in March with Cindy Sheehan and Ray and has a wacky shots from the event that somehow missed the AP and CNN, etc. reports on Friday.

Powerline and Tom Joscelyn had this to say:

Tom cites chapter and verse in the post linked to above. McGovern is Cindy Sheehan with a beard, with the same distressing tendency to start babbling about Israel at the wrong moment. He’s worse, actually: unlike Sheehan, McGovern has endorsed the idea that the Bush administration knew in advance about the September 11 attacks but “deliberately allowed 9/11 to happen.”

This is the man CNN says was “speaking truth to power” when he heckled Rumsfeld, and whom Andrew Sullivan–whose standards are getting lower all the time–described as “not some crazed lefty.” It’s scary to consider what it would take for a lefty to be considered “crazed” by either Andrew or CNN.

Not only that, but why does someone not ask Ray McGovern, himself where the WMD are at in Iraq? After all, he was saying the same thing as Rumsfeld before the war began and worse. In earlier writings by Ray McGovern, we find that he not only is extremely anti-Semitic as pointed out yesterday, but he also made claims about WMD in Iraq:

MEMORANDUM FOR: The President
FROM: Veteran Intelligence Professionals for Sanity, February 7, 2003.

(It is widely known that you have a uniquely close relationship with Israeli Prime Minister Ariel Sharon. This presents a strong disincentive to those who might otherwise warn you that Israel’s continuing encroachment on Arab territories, its oppression of the Palestinian people, and its pre-emptive attack on Iraq in 1981 are among the root causes not only of terrorism, but of Saddam Hussein’s felt need to develop the means to deter further Israeli attacks.)

With respect to possible Iraqi use of chemical weapons, it has been the judgment of the US intelligence community for over 12 years that the likelihood of such use would greatly increase during an offensive aimed at getting rid of Saddam Hussein.

Listing the indictment particulars, Secretary Powell said, in an oh-by-the-way tone, that sources had reported that Saddam Hussein recently authorized his field commanders to use such weapons. We find this truly alarming. We do not share the Defense Department’s optimism that radio broadcasts and leaflets would induce Iraqi commanders not to obey orders to use such weapons, or that Iraqi generals would remove Saddam Hussein as soon as the first US soldier sets foot in Iraq. Clearly, an invasion would be no cakewalk for American troops, ill equipped as they are to operate in a chemical environment.

This article by Ray McGovern was republished on February 15, 2003, at Now Toronto.com.

Someone ought to ask Ray McGovern the same question, “Why did you lie?”

Joe’s Dartblog has the whole exchange from Thursday and rather than coming up with the illogical conclusion that McGovern spoke “truth to power” he shows how Rumsfeld absolutely obliterated the arguments from the far-left McGovern. (Via Instapundit)

Jay Fishman sent this link from the Israel and Terrorism site where Jews were not pleased with Ray McGovern’s anti-Israel canards.